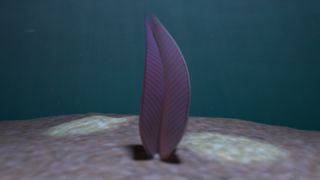 An illustration of what Stromatoveris may have looked like.
(Image: © Jennifer Hoyal Cuthill)

A mysterious, ancient organism with leaf-like fronds once flourished in shallow waters. Now, after decades of debate as to whether these organisms were fungi, algae, protozoa or even from a lost kingdom of life, new fossils suggest they were animals.

If true, these organisms would be among the first animals in the fossil record, dating back to at least 571 million years ago — the age of the oldest frond fossils. That's about 30 million years before the Cambrian explosion, when many of today's animal groups first burst onto the scene. The date is consistent with other evidence that suggests animals appeared more than 635 million years ago.

The mysterious frond fossils, which have been found around the world, date to the Ediacaran period, which spanned from 635 million to 542 million years ago. The fossilized imprints suggest that the organisms were soft and squishy and that some sported fronds that branched outward like seaweed, study co-author Jennifer Hoyal Cuthill, a paleobiologist at the University of Cambridge in England, wrote on The Conversation. Even 60 years after the discovery of these organisms, researchers still didn't know what these fronds were. [These Bizarre Sea Monsters Once Ruled the Ocean]

Now, in a paper published Aug. 7 in the journal Paleontology, Cuthill and Jian Han, of Northwest University in Xi'an, China, describe the discovery of 206 fossils of a different animal called Stromatoveris psygmoglena that date to about 518 million years ago, during the Cambrian period. The fossils were found in Chengjiang County in southern China, and they add to the existing collection of eight S. psygmoglena fossils first discovered in 2006.

S. psygmoglena,which also had leaf-like fronds,looked a lot like the older, mysterious Ediacaran fossils. To see how similar they were, Cuthill and Han used a computer to compare the two groups, analyzing their evolutionary relationships and physical features, based on more than 80 photographs of the fossils. They found that both sets of fossils belonged to the same group on the tree of life called Petalonamae— meaning the Ediacaran organisms also had to be animals.

"This means animal species were diversifying well before the Cambrian explosion," Cuthill wrote on The Conversation.

Given that these creatures can be found across tens of millions of years of the fossil record, it's likely Petalonamae were evolutionarily successful. Because the fossil record for the Ediacaran organisms had seemed to disappear by the time the Cambrian began, researchers thought the organisms had gone extinct. But by linking them to Stromatoveris psygmoglena, the new analysis suggests they lived at least through the first 20 million years of the Cambrian.

And the fact that the researchers found more than 200 fossils means they were common. "This indicates that this species was an important member of its shallow marine ecosystem rather than a rare or marginal survivor," Cuthill said in The Conversation article.