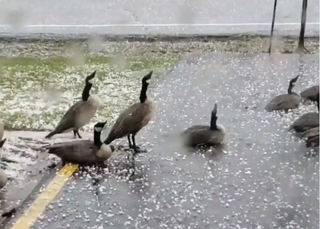 A group of geese stare up into the sky during a hailstorm in this screenshot from a video posted to Twitter.
(Image: © Blitzs_Dad/Twitter)

Take a gander at these Canada geese staring up into the sky as hail pounds the pavement all around them.

If you or I were to try this form of high-intensity storm watching, we'd likely walk away with bruises or a black eye. However, according to Jeremy Ross, a biologist and bird expert at the University of Oklahoma, this behavior has been spotted before in feathered creatures when hail is falling. And it probably helps them survive the storms, by presenting a smaller target for the falling ice, he said.

What's more, "a few individuals seem to be actually reacting to individual hailstones," Ross told Live Science. "So not only are they looking up into the sky to reduce their profile, but perhaps when a hailstone was imminently going to hit them in the face, they dodge[d] it really quickly." [The Weirdest Things That Fell from the Sky]

Naturalists and biologists have recorded birds of all sorts of species in all sorts of places staring defiantly into the sky during hailstorms. Ross said the first reference to the behavior that he's aware of was a description, published in 1919 by the naturalist Aldo Leopold, of a group of pintail ducks that "presented a very strange appearance" during a 1918 hailstorm along the Rio Grande south of Los Lunas, New Mexico.

"Each bird was facing toward the storm, and each had his head and bill pointed almost vertically into the air," Leopold wrote. "I was puzzled for a moment as to the meaning of the unusual posture. Then it dawned on me what they were doing. In a normal position, the hailstones would have hurt their sensitive bills, but pointed up vertically, the bill presented a negligible surface from which hailstones would naturally be deflected. The correctness of this explanation was later proven by the fact that a normal position was resumed as soon as the hail changed into a slow rain."

In the decades that followed, there have been occasional observations of other species exhibiting the same behavior. An article published in 1986 describes sightings of birds as varied as gulls and turkey vultures landing and pointing their beaks skyward during such storms. A December 2007 report published in the Kansas Ornithological Society Bulletin (titled "Hailstone Strike Reduction Behaviors in Southwest Kansas Birds" and not available online) documented a robin in Kansas that landed in the middle of a street and stared up into the sky as dime-size ice balls — more than heavy enough to break its delicate wing bones or smash its beak — clattered all around it.

However, Ross said he'd never seen a video of the behavior until Twitter user @Blitzs_Dad captured this one in Toronto and posted it to Twitter.

For birds as big as Canada geese, Ross said, the goal is probably to protect their sensitive heads and delicate beaks. But smaller birds risk severe damage to their wings as well when hail is falling.

"After hailstorms, we do find reports of birds with broken wings, of course, but also broken bills, so there obviously are a few that are unlucky," he said.

A broken wing is bad — potentially deadly — news for a bird, Ross said. But a shattered bill can be even worse. That's because a beak, covered in sensitive nerve endings, won't heal after a catastrophic injury, leaving birds unable to eat.

Scientists aren't sure exactly how widespread the sky-staring behavior is, or whether it's primarily learned or instinctual, Ross said. There's some evidence that younger birds don't always stare into the sky during hail, he said, suggesting it's a technique they acquire with experience. But given how widespread the behavior is, there's likely a strong genetic component, possibly related to other instincts some birds have to stare up into the sky when a predator circles overhead, he added.

Ross said that he hopes this video will put "citizen scientists" on the lookout for bird activity during hailstorms and that it will lead to more videos that will help scientists better understand the behavior.

Editor's Note: This article was updated on Aug. 6 to correct the name of the geese. They are called Canada geese, not Canadian geese.