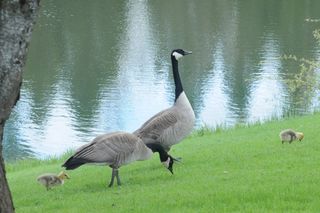 The Canada goose — North America's most familiar, and among the most hunted, of waterfowl — is not the Christmas table centerpiece it might have been. A cooked goose is considered a wonderful meal, delectable with dark meat in both legs and breast. Yet the turkey (considered by many to be less succulent) is now the more common holiday roast here, and even in England.

For that, blame can be shared in part by Charles Dickens, and much later, North America's large, green parks. At the poor Cratchits' table in 1843's "A Christmas Carol," Charles Dickens has the Ghost of Christmas Present share with Scrooge a vision of family joy: The Cratchits sitting down to a classic stuffed-goose dinner. [11 Health Benefits of Christmas Dinner ]

The redeemed Scrooge later exults in sending Tiny Tim to purchase a bird for his family's Christmas table. This time, he encourages the boy to eschew the traditional goose for a turkey — a superior, highbrow, cooking fowl. The turkey's central place at the holiday table was established for Dickens' English audience and soon across the pond for our own country's readership.

While the goose is, for the most part, no longer cooked at Christmas time as a part of either nation's tradition, this may seem puzzling to some in the United States. The Canada goose is an abundant and conspicuous bird here. To those in the know (hunters, mostly), they are considered a great meal, referred to by some as the "roast beef of the skies."

Yet even without the literary influence of our esteemed Mr. Dickens, Americans' unique history with the Canada goose, beginning in Colonial times, has played out in such a way as to insure that it would never become our preferred holiday fowl. The reason is related to how and where we have managed this species, once rare, back to abundance.

On the hunt for Canadian geese

Colonists found the Canada goose to be among the abundant bounty of the New World. Colonial-era hunting, which grew into market hunting, saw the end of the hyper-abundant passenger pigeon and massive declines in most all birds. The great passion for bird hunting and consumption left the Canada goose in decline, and the biggest of the seven subspecies, the giant Canada goose, thought to be extinct.

The subsequent revival of wild Canada geese populations is among the greatest successes of wildlife agencies in the United States. In the 1960s, the giant Canada goose was rediscovered and reintroduced widely in the east and into the south, beyond its historic range. Better management of hunting allowed for the return of this and other goose subspecies across the country. [Growing Bird Populations Show Conservation Successes ]

With a revival of Canada geese in the east came two dramatic changes that are greatly in evidence today. First, this giant fowl has become an abundant denizen of our urban and suburban landscapes. Second, it has become so comfortable in these environments that it has widely lost its migration habit. The re-introduced giant Canada goose has found ample food by eating residual grain from fallow fields.

Geese now enjoy the perfect habitat and refuge in and around our modern cities. We have created large green spaces, parks and golf courses, with lush grasses that we mow regularly. Short grass is high in protein content, low in roughage — perfect for grazers like geese. Our parks and golf courses have water (lakes and ponds) important for refuge from land predators. Also found among our green spaces are small islands in those water bodies perfect for nesting geese.

We don't hunt in urban centers or in suburbia. Because we have unwittingly provided abundant food, habitat and security from predators, these Canada geese populations have few checks on population growth. As a result, the revived giant Canada goose in the east and south is now a common and resident pest. So, too, the large western Canada goose subspecies.

Like gulls, pigeons, rats and other commensal animals around us, we are not inclined to eat geese, which have achieved quite a different image in the public imagination since Dickens, describing the meat of this bird, observed that its "tenderness and flavour, size and cheapness, were the themes of universal admiration." Our animal "pests," by contrast, are associated with real and imagined public health concerns.

We haven't domesticated the Canada goose, but the growth of parks and other natural spaces have created both habitat and food to sustain an abundant urban wildlife species. According to the old nursery rhyme, the fattening of the geese tells us Christmas is nigh. That today it more likely indicates the arrival of a new spot of urban green space is a development even the Ghost of Christmas Future would not have predicted.