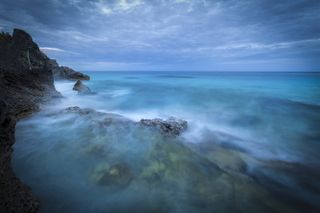 …and then they just disappeared.

The Bermuda Triangle, a mysterious stretch of ocean between Bermuda, Puerto Rico and the tip of Florida, has allegedly, throughout the years, swallowed a horde of unsuspecting ships, planes and people.

Many tales have been told about the vanishings. Aliens captured the humans for research. Some geomagnetic storm confused the pilots' navigational systems. The lost continent of Atlantis sucked the vessels into its grasp with a mysterious, unidentified force. Better yet, strong vortexes slurped the victims straight into another dimension.

But scientists throughout the years have pointed out that there are plausible explanations for the vanishings, and that the risks of traveling through the Bermuda Triangle are no different than other spots in the ocean. [Gallery: Lost in the Bermuda Triangle]

New life has been breathed into one such theory: that the vessels could have easily been overcome by giant and unexpected rogue waves. This hypothesis isn't new, but a group of U.K. scientists recently discussed the evidence for freak waves and other theories (including the role of human error) in a three-episode documentary series "The Bermuda Triangle Enigma," produced by the BBC for Channel 5.

"There is no doubt this area is prone to rogue waves," Simon Boxall, an oceanographer at the University of Southampton and one of the scientists on the team, told Live Science. They are possible "anywhere you get multiple storms coming together."

Rogue waves are steep and tall, like "walls of water," and they often hit unexpectedly, according to the National Oceanic and Atmospheric Administration. The tip of South Africa, for example, is very prone to them, where waves from storms in the South Atlantic Ocean, the Indian Ocean and the Southern Ocean all come together at once, Boxall said. Indeed, there were similar disappearances of big container vessels and tankers off the tip of South Africa throughout the years, he said.

This also holds true for the Bermuda Triangle, where storms can come from all directions, like Mexico, the equator and farther east in the Atlantic. If each wave can reach over 30 feet (10 meters) tall, occasionally they can coincide at the right moment and create a rogue, or "freak," wave that can be over 100 feet (30 m) high.

Engineers at the University of Southampton in England built some ship models, including one of the USS Cyclops, a vessel that vanished in the Bermuda Triangle in 1918 with over 300 people on board.

They simulated rogue waves in a wave tank and found that, indeed, ships can sink quickly if hit by them. The bigger the ship, the bigger the difficulty staying afloat, they found. Small ships can get swamped by them, but sometimes they can ride the wave if they hit it bow-on, Boxall said. But big ships — designed to be supported in the front by the top of one wave and in the back by the top of another — snap in two.

Another theory has to do with pockets of explosive methane gas that could, due to some disturbance, float up toward the water's surface and cause the water to be less dense than the ship, leading the ship to sink. However, no experiment to date has been able to prove that this is possible, Boxall said.

"Theoretically, it could be happening, but there are lots of places in the world where this can happen," not just in the Bermuda Triangle, Boxall said. Instead, he thinks the most common cause for the mysterious vanishings is human error.  [The 20 Most Mysterious Shipwrecks Ever]

The famous disappearance of Flight 19 — five U.S. Navy aircraft that vanished during a training mission in 1945 — that led one journalist in 1964 to give the area its current name, probably occurred because the crew got lost and ran out of fuel, Boxall said.

About a third of all registered and privately owned ocean craft in the U.S. are in the states and islands of the Bermuda Triangle area, he said. And according to the most recent 2016 figures from the Coast Guard, 82 percent of incidents in this area that year involved people who had no formal training or experience of being at sea, he added.

"So, you take a third of the entire boating population of the U.S., you dump them in the Bermuda Triangle," and what you get is mysterious vanishings, Boxall said. You don't need any licensing or specific equipment like radios or navigation maps to take a boat to sea, he added.

"A number of times, working at sea, we've come across people who are navigating using a road map, who are relying on their mobile phones as their means of communication, discovering … you get 30 miles offshore [and] you lose the signal," Boxall said.

In addition, "environmental considerations could explain many, if not most, of the disappearances," NOAA wrote on its website. "The ocean has always been a mysterious place to humans, and when foul weather or poor navigation is involved, it can be a very deadly place."

NOAA also says the area could be prone to accidents because of the Gulf Stream, a strong and fast ocean current that can cause "rapid, sometimes violent, changes in weather," and shallow waters around the Caribbean islands that can prove fatal for ships.

But, you know, maybe it is aliens capturing unsuspecting humans using vortexes that lead straight into their laboratories that they've set up in the lost city of Atlantis.

Editor's Note: This article was updated on Aug. 3. The original map showing the Bermuda Triangle was incorrect. The so-called Bermuda Triangle is an area between Florida, Bermuda and Puerto Rico.