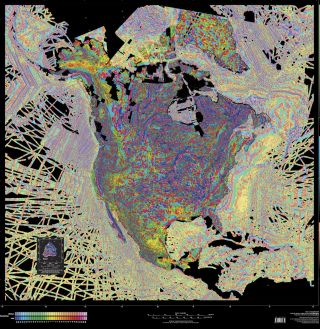 The east coast of North America was once as wild as the West, with massive mountains rising between colliding tectonic plates, volcanoes belching lava and giant faults slicing the crust.

That's because millions of years ago, eastern North America was part of Gondwana and Pangaea, the supercontinents that formed as Earth's tectonic plates collided, split apart, and then crashed together again before rifting and drifting toward the spots where they're located today. Though North America's east coast is relatively quiet now, clues to these ancient tectonic mash-ups remain buried deep underground.

A new look at one of these clues reveals that a weird magnetic signal near Florida shows the peninsula stuck to North America's heel like a piece of old tape about 300 million years ago, when the central and southern Appalachian mountains were built. [In Images: How North America Grew as a Continent]

The rocks beneath Florida suggest the peninsula originally wasn't part of North America. Rather, it's a fragment of either Africa or South America, sutured onto the southeastern United States near an unusual feature called the Brunswick Magnetic Anomaly, researchers say.

The Brunswick Magnetic Anomaly is a geological feature that snakes from Alabama across Georgia, and offshore to North Carolina's Outer Banks. Anomalies in Earth's magnetic field are caused by structures such as faults, and by the varying magnetic intensities of different rock types. These slight differences in rock magnetism can be measured and mapped to find hidden geologic structures.

The new study aims to settle a long-running debate over the Brunswick Magnetic Anomaly's origin, and is part of a bigger goal: to better understand the complex tectonic history of eastern North America. One side of the debate suggests the anomaly marks the split between North America and Africa — a rift created when Pangaea broke up about 200 million years ago. The other side holds that the anomaly is much older, and marks the original collision zone between the two tectonic plates.

To settle the argument, geophysicist Horry Parker of the University of Georgia searched for evidence of either rifting or collision beneath the magnetic anomaly. Parker used seismic data to reveal deep geologic structures, similar to the way doctors use a CT scan to peer inside the body.

It turns out that the Brunswick Magnetic Anomaly lines up with what geologists call a suture zone, which is a structure formed during an ancient collision between two tectonic plates. The suture zone is buried about 9 to 12 miles (15 to 20 kilometers) below the surface, Parker said.

In other words, the magnetic anomaly is consistent with the side of the debate arguing that the anomaly formed during the older tectonic event — the collision that formed the southern Appalachian Mountains.

But the seismic data also found remnants of Pangaea's breakup in the shallow crust near the magnetic anomaly, Parker said. This suggests that the continental rifting might have affected the upper and lower crust differently, leaving evidence of the collision zone intact only in the deep crust.

"It's an interesting problem, why we see evidence for both in the same general area," he said. "Our overall goal is to understand how the continental collision was affected by continental rifting, so the interesting thing is that maybe the upper and lower crust may not be affected in the same way by rifting."

The findings were published March 31 in the journal GSA Today.