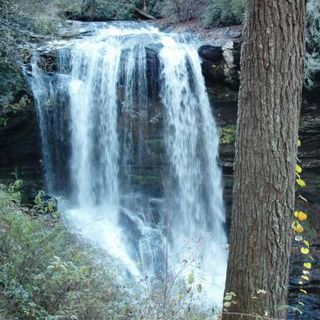 A waterfall flows in the Cullasaja River basin in the southern Appalachian Mountains, which were uplifted geologically recently according to a February 2013 study in Geological Society of America Today.
(Image: © Karl Wegmann, NC State University)

Parts of the Appalachian Mountains got a relatively recent face-lift, compliments of the Earth's mantle, a new study suggests.

The Cullasaja River basin, part of the southern Appalachians in western North Carolina, holds scores of mountains and valleys, but parts of its terrain are more rugged than others. The subdued upstream topography consists of rolling hills, while steep slopes and landslides dominate the downstream vista.

Usually, gentle slopes are hallmarks of an older landscape, and rugged peaks point to younger terrain with recent or active tectonic mountain-building processes. But geologists know the Appalachians have been tectonically quiet for more than 200 million years. What could have rejuvenated the southern Appalachians?

Big changes in the landscape

Regional uplift driven by the Earth's mantle — the hot, flowing layer below the outer crust — could be the culprit, according to a team of researchers led by geologist Sean Gallen of North Carolina State University. To test the idea, they looked at the rugged landscape itself — specifically, its waterfalls.

"Waterfalls often indicate there's been a big change in a landscape," Gallen told OurAmazingPlanet. "They're a mobile boundary that separates the active, rugged topography below from the relict topography above."

If a landscape is in equilibrium — that is, relatively stable and not in the process of uplifting or eroding — its rivers will wind calmly through it. If a region has seen relatively recent uplift, its rivers will have rapids and waterfalls. Using mathematical models to compare the dynamics of the upper Cullasaja River to the lower part, Gallen reconstructed the ancient landscape and estimated how much change has occurred.

He then calculated how much time those changes would take, based on erosion rates at waterfalls in the lower part of the river. The answer  –  8 million years  –  indicates the region was lifted up relatively recently.

Plate tectonics and the usual mountain-building suspects probably weren't responsible, since the Appalachians were tectonically quiet by that time. But by turning to previous surveys of the region, Gallen found another possible culprit.

Peeling off, bobbing up

Geophysical images of the mantle and lower part of the crust show some interesting anomalies below the Appalachians, Gallen said. One way to explain those features is that the dense "root" of the mountain range delaminated, or peeled off, from the rest of the crust around 8 million years ago. [Infographic: Tallest Mountain to Deepest Ocean Trench]

"Sometimes the mountain root becomes more dense than the mantle below, and it's not gravitationally stable," Gallen said. "It will basically drip off the base of the crust, and the remaining crust, which is lighter, will bob up on top of the mantle."

Hot, less dense material from the mantle would have then rushed up to fill the void, uplifting the region and giving the terrain a more youthful appearance. Uplift is probably no longer happening in the southern Appalachians, he explained, but the landscape still bears the effects — for now anyway.

"What we're seeing today is just the landscape catching up with the crust," Gallen said.

The study appears in the February issue of the publication Geological Society of America Today.