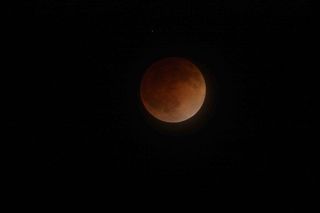 A blood moon photo taken on Apr. 15, 2014. The world did not end when that blood moon occurred, and it is unlikely to end tomorrow, either.
(Image: © NASA Ames Research Center/Brian Day)

Tonight (July 26), the moon will pass through the center of Earth's rusty-red shadow and remain there for a whopping 1 hour and 43 minutes.

To astronomers, this is a thrilling example of a total lunar eclipse — the longest one we'll see for the rest of the century. To some doomsaying YouTube preachers, on the other hand, it's a terrifying example of a "blood moon," and it may be the last one we ever see in this or any century.

"The blood moon is definitely a prophetic sign [of the end times]," one prominent YouTube preacher (whom Live Science prefers not to name) said in a recent video. "There are way too many prophecies in play here… we're in the end times." [End of the World? Top 10 Doomsday Threats]

This is not the first time a so-called blood moon has attracted prophecies of doom — not by a long shot. Throughout history, many non-Christian cultures have interpreted the disappearance of the trusty moon as a dark omen. According to National Geographic, Incan myths held that a lunar eclipse meant the moon had been eaten by a large jaguar, while ancient Mesopotamians believed an eclipse was the work of demons. With the light of the moon being so crucial to timekeeping and agriculture, it's little wonder why its disappearance or sudden blood-red makeover was a terrifying sight.

For some, that terror persists today. Just a few years ago, two rival preachers promoted two separate (but very similar) theories that a series of four consecutive blood moons during 2014 and 2015 heralded the end times, citing as their main evidence a few quotes from the Bible.

So, what does the Bible actually say about blood moons?

While the phrase "blood moon" doesn't actually appear at all in the Bible, there are three distinct mentions of the moon turning the color of blood — and they're all pretty similar.

The only mention in the Old Testament shows up in the book of Joel, which describes a plague of locusts and foretells an apocalyptic event that will separate the faithful from the unfaithful. Here's what Joel says about that pending apocalypse, according to the King James translation: "The sun shall be turned into darkness, and the moon into blood, before the great and the terrible day of the Lordcome." (Joel 2:31)

Two very similar passages appear later in the New Testament, in the books of Acts and Revelations. Acts 2:20 says: "The sun shall be turned into darkness, and the moon into blood, before that great and notable day of the Lord come."

And, according to Revelations 6:12: "And I beheld when he had opened the sixth seal, and, lo, there was a great earthquake; and the sun became black as sackcloth of hair, and the moon became as blood."

In all three cases, it's clear that the moon turning red as blood precedes a grave reckoning. Interestingly, all three passages also mention the sun turning to darkness before that reckoning  — likely a description of a total solar eclipse. With only these three passages in mind, it's easy enough to interpret every single solar or lunar eclipse as a potential sign of the world's end.

So, why shouldn't you? Live Science doesn't want to tell anyone what to believe, but we do like to share facts and stories that can help people make more informed decisions. So, here's one fact that makes us feel better: After millions (possibly billions) of prior blood moons, the world has not ended yet.

Thanks to the predictable orbits of the Earth and moon, every calendar year sees a minimum of four eclipses — two solar and two lunar, according to Earthsky.org. Some years may have many more, up to a maximum of seven (1982 was the last time that happened, and 2038 will be the next time it occurs). But whether you look at the minimum or maximum annual number, there have still been tens of billions of eclipses since the Earth and moon formed about 4.5 billion years ago. Somehow, our planet has survived through all of them.