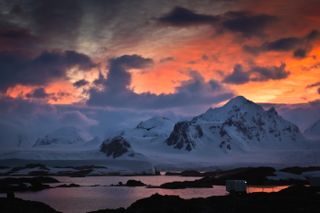 Seven years ago, a group of researchers detected something strange above Antarctica's skies.

Large, mysterious ripples were propagating across Earth's atmosphere. These so-called "inertia-gravity" waves are oscillations of air formed by the force of Earth's gravity and rotation.

These waves aren't uncommon and occur frequently in various parts of Earth's atmosphere, but they typically disappear in a matter of hours. Yet the waves above Antarctica were surprisingly persistent — they appeared in every observation taken since researchers first detected the waves years ago. [Infographic: Earth's Atmosphere Top to Bottom]

What caused these persistent gravity waves to keep popping up in the mesosphere for up to 10 hours at a time, however, remained a mystery for years. (The mesosphere is the portion of Earth's atmosphere between 30 and 50 miles [50 and 80 kilometers] above the planet's surface.) Now, the same team that detected the waves has proposed two plausible explanations in a pair of studies, with the latest study published yesterday (July 25) in the Journal of Geophysical Research: Atmospheres.

One possibility, they said, is that the large, persistent waves — which span up to 1,900 miles (3,000 kilometers) of the mesosphere — actually stem from smaller waves in the atmospheric layer below it, known as the stratosphere. (The stratosphere extends up to 30 miles above Earth's surface.)

According to this theory, winds that flow down mountains in Antarctica feed these lower-level gravity waves. In turn, the waves grow and move higher up in the atmosphere. Once the waves reach the boundary between the stratosphere and the mesosphere, they break just like an ocean wave on the shore, and generate bigger waves, the researchers explained.

(Gravity waves are not to be confused with gravitational waves. The latter are ripples in space-time that emerge from Einstein's theory of relativity and have nothing to do with air movements in the atmosphere.)

Another possibility, the researchers said, involves the swirling polar vortex, a low-pressure zone that rotates clockwise and takes over Antarctica's winter skies. These speedy, rotating winds can either alter lower-level gravity waves as they move upward, or churn out these waves themselves, said lead author Xinzhao Chu, a professor in the Department of Aerospace Engineering Sciences and the Cooperative Institute for Research in Environmental Sciences at the University of Colorado Boulder.

Their research uses a combination of modeling and observations from lidar, a laser-based measurement technique. Lidar can determine the temperature and density across various parts of the atmosphere, revealing the perturbations caused by these waves. The researchers can also calculate the energy and momentum carried by gravity waves.

But most climate models haven't properly accounted for the energy carried by these waves, she said. For example, the simulated temperatures in the atmospheric boundary between the stratosphere and the mesosphere above Antarctica are way colder than the observations show, she said. This area, called the stratopause, is important for understanding humanity's effects on the ozone. Without correct temperature simulations, you "cannot predict the ozone trend well," she said.

"We think the new understanding about these waves, especially secondary wave generation, may help to improve the models," Chu said.

But these are still theories, and there are others out there. A 2016 paper published in the Journal of Geophysical Research: Space Physics proposed that vibrations of the Ross Ice Shelf in Antarctica caused by ocean waves could explain the mysterious atmospheric ripples. Chu said she can't rule out this possibility, either.