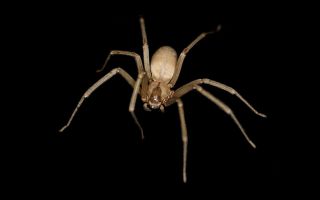 An Arkansas woman who recently had her leg amputated above the knee claimed that a spider bite was to blame — specifically, a brown recluse (Loxosceles reclusa). But experts told Live Science that the connection between brown recluse bites and amputations is more grounded in myth than in facts.

Kiara Boulton visited a hospital in Memphis, Arkansas, after discovering a painful swelling on her left foot; she said the mark was a spider bite and suspected it came from a brown recluse, WREG Memphis reported. An infection developed, eventually becoming so severe that Boulton's leg required amputation, according to WREG.

Boulton did not discover the bite until after it happened, so she didn't see the spider that was purportedly responsible, and doctors at the hospital declined to confirm if spider venom led to Boulton's amputation. [Brown Recluse Spiders: Facts, Bites & Symptoms]

But can a brown recluse bite really lead to the loss of a limb?

While brown recluse spiders are venomous — and their venom does affect people — their alleged bites are often wrongly identified. And the damage attributed to recluse venom is often caused by bacterial, fungal or viral infections; bites from other insects; or poor circulation from a medical condition, according to the National Capital Poison Center, a nonprofit poison-control organization.

In the U.S., brown recluses are widespread in Midwestern states — including Arkansas, where Boulton was bitten — and in parts of the South. But reports of brown recluses often surface in places where no brown recluses are found, such as Alaska, California and Canada, arachnologist Richard Vetter, a retired research associate from the Department of Entomology at the University California, Riverside, told Live Science.

Even in areas where recluses are known to live, claims of bites can be greatly exaggerated. A study conducted in 2004 found that reports of brown recluse bites in South Carolina vastly exceeded the number of known spiders. While 738 bites were described that year, only 44 brown recluse spiders had been identified in the state, suggesting that most of the bites blamed on brown recluses likely had a different source, researchers reported in the Journal of the American Board of Family Medicine.

So, why would a person jump to the conclusion that they've been bitten by a brown recluse?

There are more than 47,000 spider species, nearly all of which produce venom. But there are only four spider families with bites that are harmful to people — one of which is the recluse family, Greta Binford, an associate professor of biology at Lewis & Clark College in Portland, Oregon, told Live Science.

And brown recluse venom is special; it includes a tissue-destroying toxin produced by no other spider group, Binford said. Reactions to the venom vary widely among individuals — many people who are bitten develop no symptoms at all, while others experience localized necrosis, or tissue death. In rare instances, the venom can lead to kidney failure, but those cases are highly unusual, according to Binford.

After a bite, pain in the region can be "stabbing and penetrating" or may develop into "a burning sensation," according to a paper published in December 2010 in the journal Clinician Reviews. Brown recluse venom targets and destroys tiny blood vessels, or capillaries, around the site of the puncture. The bite site may show some swelling, but the skin surface is usually flat or even slightly concave; it may appear bluish or purple, and a white ring develops around the site as the blood supply is cut off, Binford explained.

"It's not uncommon for these venoms to cause lesions," she said. "That's the byproduct of the immune response around the bite site — the body will simply cut off blood flow."

If the area around the bite site stays red, that's actually a good sign; it means that the capillary network is not completely destroyed, Vetter said. Once lesions form, the wound can take up to six months to heal completely, according to the Clinician Reviews report. [Spider-Man: 5 Weird Effects of Real Spider Bites]

Most of the time, when a person says they've been bitten by a brown recluse, they didn't actually see the spider, and what they think is a spider bite could very well be something else. Often, wounds identified as brown recluse bites are actually caused by a serious bacterial infection known as methicillin-resistant Staphylococcus aureus (MRSA); like recluse bites, MRSA can also cause intense pain and tissue death, researchers reported in Clinician Reviews.

In fact, misdiagnosis of MRSA as a spider bite can delay proper treatment, potentially increasing the likelihood of advanced necrosis that could require amputation, according to "Case Studies in Medical Toxicology: From the American College of Medical Toxicology" (Springer, 2017).

Another factor to consider in reports of amputations linked to brown recluse bites is whether or not the victim has diabetes, Vetter told Live Science. (In the recent Arkansas case, Boulton was diagnosed with diabetes at age 10, WREG reported.) Diabetes can constrict blood vessels in the feet and legs, choking off healthy circulation, and many people with diabetes develop peripheral artery disease (PAD), which increases the likelihood that a person will develop infections that require amputation, according to the American Diabetes Association (ADA).

"People with diabetes are far more likely to have a foot or leg amputated than other people," the ADA reported.

But otherwise healthy people who have been bitten by a brown recluse? Not so much, Vetter said.

"I don't think there's one valid case in the literature of amputation [that is] due to a brown recluse bite," Vetter told Live Science.