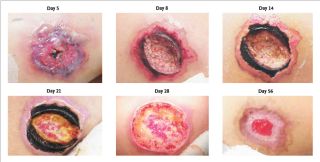 After being bitten by a brown recluse spider, a 10-year-old girl in Mexico required two medical procedures to remove blackened, dead tissue from her leg.
(Image: © The New England Journal of Medicine ©2013)

When a little girl's spider bite developed into a nasty open wound, doctors had to perform two procedures to remove blackened, dead tissue from her leg, researchers say.

Five days after being bitten by a spider, the girl — a 10-year-old living in northeast Mexico — developed a 2-inch lesion of dead tissue, along with swelling and a fever. Researchers suspect the bite came from a brown recluse spider, a venomous spider that is most commonly found in the south and central United States, including Texas.

The girl was treated with antibiotics and pain relievers, and doctors removed the dead tissue from the wound. Two weeks later, she was able to leave the hospital. About a month later, more dead tissue was removed from the wound to speed up the healing process. [See Images of Girl's Brown Recluse Spider Bite.]

After 56 days, the wound was almost healed, and a scar had started to form, according to the researchers, at the Medical School of the Autonomous University of Nuevo Leon in Mexico, who reported her case.

Bites from brown recluse spiders are rare because the arachnid  is not aggressive, and cannot bite through clothing, according to the University of Kentucky. Most bites occur when the spider is trapped against bare skin.

Most bites from the spider heal within three weeks without treatment. But in some cases, the venom from the bite destroys skin tissue, and the wound may grow several inches over a period of days. Severe reactions are more common in children and older adults.

It is hard to diagnose a brown recluse spider bite, and many suspected bites are actually caused by other things, such as flesh-eating bacteria or fungal infections. [See The Surprising Cause of Most 'Spider Bites'].

The girl's case is published in the Aug. 1 issue of the New England Journal of Medicine.