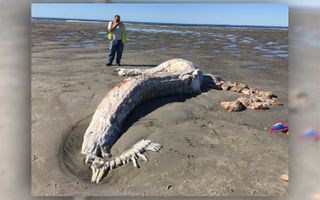 An enormous decomposing carcass that washed ashore in Maine was difficult for beachgoers to identify. Turns out it's a basking shark (Cetorhinus maximus).
(Image: © Amy Cesar)

A mysterious decomposing "sea monster" washed ashore in Maine yesterday (July 19), News Center Maine reported. Can you guess what the monster was?

The large creature is about 15 feet long and 4 feet wide (4.5 by 1.2 meters). It was in such an advanced stage of decomposition that beachgoer Chris Blair told News Center Maine that it just looked like a blob of something. "It was pretty gross," he said. Beachgoers suspected it might be a whale carcass, due to its size, but experts from Marine Mammals of Maine told News Center Maine that this certainly wasn't a marine mammal.

"I can almost tell you what it is before even looking at it," said George Burgess, a shark scientist and director emeritus of the Florida Program for Shark Research. "It's a basking shark," he told Live Science. [13 Bizarre Things That Washed Up on Beaches]

Once he viewed the photos, Burgess confirmed his suspicions. The sea creature is a decomposing basking shark (Cetorhinus maximus) that had "been worked over, no doubt," Burgess said. He said he suspected that once the creature died, other sharks, "most notably the white shark, might well have been involved in doing some munching on it."

Basking sharks are the second largest species of fish, growing up to 32 feet (9.7 m) long and weighing up to 5 tons (4.5 metric tons), according to the Florida Museum. These gentle giants are filter feeders and are often seen with their mouths agape as they filter seawater through their unique gills to scoop up zooplankton. Humans have nothing to fear from these guys, although their skin is exceptionally rough so it's best to avoid close encounters.

Like many species of sharks, basking shark populations are declining, and they're classified as a vulnerable species by the International Union for Conservation of Nature (IUCN). Basking sharks live throughout the world's temperate waters, including off the east coast of North America from Newfoundland to Florida, according to the Florida Museum.

Burgess estimated the shark had been dead for several weeks before washing ashore. "The water off of Maine is quite cold even this time of year, so decomposition processes are much slower," he explained.

The monster shark carcass didn't haunt the beach for long. The local Public Works Department scooped the animal up with a bulldozer and took it to a landfill to be buried, News Center Maine reported.