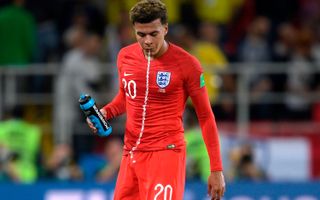 England's Dele Alli spits out water during a match against Colombia at the 2018 World Cup in Moscow.
(Image: © Juan Mabromata/AFP/Getty)

Close watchers of this year's World Cup may have noticed players engaging in an odd practice: They'll take a swig of liquid, but instead of swallowing, they'll spit it out.

Indeed, both England's captain, Harry Kane, and Portuguese star Cristiano Ronaldo have been seen expelling liquid from their mouths during matches, according to The New York Times.

So, what's up with all the spitting?

While it's unclear exactly why any given player may need to swig and spit, some players may be practicing what's known as "carb rinsing," the Times said.

This practice involves swishing a carbohydrate solution in your mouth for about 5 to 10 seconds and then spitting it out. Although the practice may look gross, some studies suggest that carb rinsing boosts athletic performance during high-intensity activities that last about 1 hour.

For example, a 2014 review study that analyzed data from 11 previous studies of carb rinsing found that in eight of the studies, carb rising improved performance times in activities such as cycling and running that lasted an hour or less, compared with rinsing and spitting out a placebo solution. But three studies in the review found that the practice had no effects on performance. [Are Sports Drinks Better or Worse Than Water?]

Overall, review studies suggest that carb rinsing may provide a small performance benefit — around a 2 to 3 percent performance boost — said Dr. Sourav Poddar, a sports-medicine physician at UCHealth in Denver. This is about the same boost people get from actually swallowing a carbohydrate solution during endurance exercise, Poddar noted.

But by not swallowing the carbohydrate liquid, athletes may avoid some gastrointestinal issues; for example, if the drink is too concentrated, it can sit in the stomach, and your body will need to produce more fluids to dilute the substance, said Dr. Michael Joyner, an exercise physiologist at the Mayo Clinic in Rochester, Minnesota.

Researchers aren't sure how carb rinsing improves performance. One hypothesis is that carbohydrate receptors in the mouth activate certain areas of the brain, which in turn improve motor function, or movement of the body, Poddar told Live Science.

Studies also show that when people have a sweet taste their mouths, it can change the perception of how hard they're working, Joyner said. So, even without swallowing the liquid, a sweet carbohydrate solution might help people feel refreshed or more motivated, Joyner said. (Studies that test carb rinsing typically use a solution of glucose, which has a sweet taste, or maltodextrin, a food additive that's colorless and tasteless.)

However, most studies on carb rinsing have been conducted in lab settings and have focused on cycling, so it's unclear how the benefits might translate to "a high-stakes situation like the World Cup," Joyner told Live Science.

Even though science hasn't reached a consensus on the benefits of carb rinsing, or about how it works, Poddarsaid that it is a "relatively practical, easily accessible method" and there's "probably little downside" to trying it.

But Poddar stressed that spitting out carbohydrate solution isn't something you should do if you're running a marathon or engaging in an exercise that lasts longer than an hour or two. With long-duration exercise, you need to consume more carbohydrates to fuel your muscles. The regulation time for a World Cup match is 90 minutes.