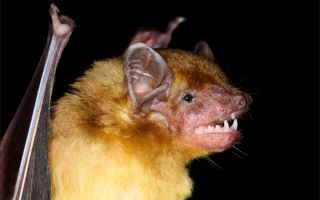 Two newfound species of bats recently discovered in Kenya are endearing, lemon-colored fuzzballs. But scientists aren't interested in these bats just for their flashy colors; the animals also provide important clues about some very tangled branches in the bat family tree.

Bats in the genus Scotophilus (skuh-TOE-fill-us), also known as African yellow house bats, live close to humans, typically nesting in the eaves and rafters of people's homes. Scientists discovered the first Scotophilus species nearly 200 years ago; since then, 21 species have been described across Africa and Southeast Asia, with 13 species native to the African continent — but the number of African species could be as high as 15, researchers reported in a new study. [Flying Mammals: Gallery of Spooky Bats]

And they aren't all dressed in yellow; these insect-eating bats, which can weigh up to 3 ounces (85 grams), have bellies tinted in a range of colors, from white to brown to an orange-gold, study co-author Bruce Patterson, the MacArthur curator of mammals at the Field Museum of Natural History (FMNH) in Chicago, told Live Science.

But because different Scotophilus species can look very much alike, determining where the different species are found and how many species inhabit a given region has been difficult, lead study author Terrence Demos, a postdoctoral researcher with FMNH's Integrative Research Center, told Live Science in an email.

To complicate things even further, some of the known bat species were given scientific names despite having incomplete analyses, and other species received duplicate names, Patterson explained.

The researchers gathered DNA from skin samples taken from bats in Kenya, using their data to organize known species and subspecies (populations that are genetically similar, but geographically isolated). In addition to unraveling some of the knotty relationships among African yellow house bats, their analysis uncovered two previously unknown species, the authors wrote in the study.

Based on their discoveries about this diverse, understudied group, further DNA tests across a wider sampling of bats could reveal even more new species of yellow house bats distributed over the continent, Demos added.

The findings were published online July 11 in the journal Frontiers in Evolution and Ecology.