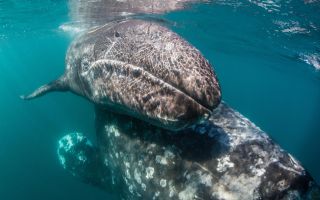 Pliny the Elder wrote in the first century A.D. about gray whale (Eschrichtius robustus) mothers and calves, like these here, getting attacked by killer whales near the Strait of Gibraltar. Now scientists believe him.
(Image: © robertharding/Alamy)

Scientists have questioned the credibility of Pliny the Elder's now 2,000-year-old account of orcas hunting whale calves near the Strait of Gibraltar, since those marine mammals aren't known to visit that area. Now, archaeological evidence suggests Pliny knew exactly what he was talking about.

Researchers discovered whale bones from the North Atlantic right whale (Eubalaena glacialis) and the Atlantic gray whale (Eschrichtius robustus) within the ruins of an ancient Roman fish-processing facility located along the Strait of Gibraltar. The discovery was published today (July 10) in the journal Proceedings of the Royal Society B.

In the first century A.D., Pliny the Elder famously wrote about orcas (also called killer whales, though they are in the dolphin family) attacking whales and their calves in the Bay of Cádiz, near the Strait of Gibraltar— the entry point from the Atlantic Ocean into the Mediterranean that lies between Africa and Europe. According to Callum Roberts in "The Unnatural History of the Sea" (Island Press, 2008), Pliny described how whales "during the summer periods hide in a certain calm and spacious inlet, and take marvelous delight in breeding there." Pliny continued with a description of the brutal battles he witnessed as killer whales preyed on the mother whales and their calves. [See Stunning Photos of Whales]

But this didn't make sense to ecologists. There are very few whale species that visit the Mediterranean Sea, as outlined in a 2016 report published in the journal Advances in Marine Biology, and none of those species are known to use the area as a calving ground. This fact led scientists to wonder if Pliny's account was accurate, or if perhaps he was mistaking dolphins for whales.

That is, until researchers discovered ancient whale bones within the ruins of a fish-processing site in the ancient Roman city of Baelo Claudia, near today's Tarifa, Spain. Pliny's account "doesn't match anything that can be seen there today, but it fits perfectly with the ecology if right and gray whales used to be present," study co-author Anne Charpentier, an ecologist at the University of Montpellier, said in a statement from the University of York.

Roman fishermen harvested large fish such as tuna, and now, archaeologists wonder if they were harvesting whales, too. The fishermen probably didn't have the technology necessary for going out to sea to hunt large whales, said lead study author Ana Rodrigues, an ecologist at the French National Center for Scientific Research. "But right and gray whales and their calves would have come very close to shore, making them tempting targets to local fishermen," she said in the statement.

The discovery highlights the fact that even heavily explored regions have their mysteries. "It seems incredible that we could have lost and then forgotten two large whale species in a region as well-studied as the Mediterranean," Rodrigues said. "It makes you wonder what else we have forgotten."