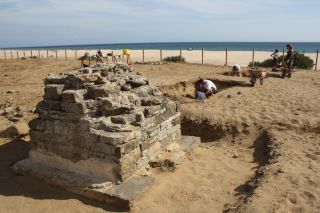 A team digs for beachside buried treasure in trenches at Baelo Claudia.
(Image: © University of Alicante)

Archaeologists are digging up the necropolis of Baelo Claudia, one of the best preserved Roman cities in Spain, and they report that they've already uncovered several intact graves that likely date back more than 2,000 years.

Founded in the late second century B.C., Baelo Claudia lies near today's town of Tarifa at the southernmost tip of Spain, separated from Morocco by the Strait of Gibraltar. Since 2009, scientists at the University of Alicante have led excavations at the site, which is considered by some the best preserved city from the high imperial Roman period of the Iberian Peninsula.

During this summer's digging season, archaeologists at the ancient coastal town turned their focus to Baelo Claudia's graveyard. In a blog post, Fernando Prados Martínez, a University of Alicante professor who is leading the project, wrote that Monday (Sept. 10) began the last week of excavations. But his team has already made several finds.

They've uncovered funerary monuments as well as cremation graves and intact graves, complete with their grave goods, according to a statement from Asociación RUVID, a Valencian nonprofit research association. The team hopes to learn more about the ancient funeral rituals of the city through their excavations.