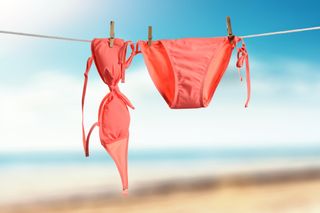 Can wearing a wet bathing suit cause a yeast infection? The answer, it turns out, isn't so clear cut.

Vaginal yeast infections are fungal infections that most women will experience at some point in their lifetime. Though uncomfortable, they're not dangerous. All vaginas have some yeast in them; infections happen when this naturally occurring yeast grows out of control. This can happen either when the bacteria in the vagina that usually control yeast populations fail to do so, or when an external, aggressive strain of yeast colonizes the vagina, said Dr. Jen Gunter, a San Francisco-area OB-GYN.

But can a wet bathing suit trigger either of those things? [7 Facts About the Vagina]

Dr. Yvonne Butler Tobah, an OB-GYN at the Mayo Clinic, said that wearing a wet bathing suit for an extended period of time may increase a woman's risk of a yeast infection, though it isn't a direct cause. "If the question is, 'Will a wet bathing suit cause a yeast infection?' the answer is 'no,'" Butler Tobah told Live Science. "But it can increase the risk, depending on how long you're sitting in it."

Yeast thrives in stagnant, moist, warm environments, like that inside a bathing suit that stays wet for a long time after leaving the pool or ocean, said Dr. Leena Nathan, an OB-GYN at UCLA Health.

"A wet bathing suit can put women at risk for having a yeast infection, if they sit in it for an extended period of time," Nathan told Live Science. Swimming itself doesn't increase the risk of yeast, she said, because "when there is water constantly flowing, it is not a stagnant environment, which promotes overgrowth of yeast."

Gunter, however, disagreed, calling the idea that wearing a wet bathing suit causes a yeast infection an "old wive's tale."

"It is from a time before we understood anything about vaginal microbiology," Gunter told Live Science. "If moisture causes yeast, how do we manage with moist vaginas?"

So, why the disconnect? Both yeast infections and wearing a wet bathing suit are relatively common, after all.

Wet clothing in general, Butler Tobah said, is difficult to study. To know for certain whether a long time spent in a wet bathing suit can cause a yeast infection, she said, researchers would have to perform a controlled study: put one large group of people in wet bathing suits for several hours, and another in regular clothing for several hours, and then see which group ended up with more yeast infections. There are practical problems with doing studies like this, she said, not to mention the ethical issue of trying to give people yeast infections.

In the absence of experimental data, researchers are left with observational data. Butler Tobah pointed to a review paper on "facts and myths" about the causes of yeast infections, published in the International Journal of STD and AIDS in 2002. The authors found that the data on whether wearing wet clothes can cause yeast infection — they focused on tight and synthetic clothing, which might "trap moisture near the crotch, creating an environment for yeast to multiply" — are mixed. Certain studies found that yeast infections were more common when women wore tight-fitting and wet clothing, while others found no effect.