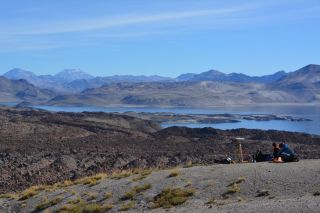 Scientists set up a GPS station to measure the altitude of the ancient shoreline of Laguna del Maule in Chile.
(Image: © Brad Singer)

The Laguna del Maule, a field of volcanoes in the Andes, is restless.

The Earth's surface in the region has been rising, and not slowly. Satellite photos taken over the past 10 years have shown that the surface has been rising by around 8 inches (20 centimeters) a year — much faster than any other volcanic area in the world.

Because this region is historically known to have explosive eruptions, geologists are trying to figure out what's going on below the surface to better predict when and how such catastrophic events may occur.

In a new study published June 27 in the journal Science Advances, a group of geologists used traces of an ancient shoreline to understand why the ground is rising today.

"The restlessness expressed today is pretty astonishing," said Bradley Singer, a geology professor at the University of Wisconsin-Madison and the lead author of the study, referring to the rising ground. But "we do not believe that this current astonishing state of unrest is something new." These episodes have probably happened around 16 times in the past 10,000 years, he added. [The 11 Biggest Volcanic Eruptions in History]

Using traces of an ancient shoreline and sediments left over from past explosions, the researchers created models to recreate how the area was warped by underground movement boiling up from the Earth's mantle across thousands of years.

This study really stemmed from a head-scratcher.

The middle of the volcanic region is filled by a lake, but that lake used to be much larger before a portion of a lava dam collapsed leading to a flooding event that drained some of it about 9,400 years ago, Singer said. When the water level dropped, it left behind a mark like a bathtub ring. Singer and his team noticed something weird about this ancient shoreline mark — it was much higher on the south side of the lake's edge than it was on the north side.

When they measured it, they found a difference of about 200 feet (60 meters) between the sides, and they predicted that this displacement was due to the Earth's mantle pumping large amounts of magma into magma reservoirs that lie 3.1 to 4.3 miles (5 to 7 kilometers) underground. Back then, the pool of magma was puffing up ground that was not directly beneath the lake.

That same type of hot-magma injection is probably happening today, though this time it's happening under the lake, Singer said.

Most of the magma that reaches these reservoirs cools and crystallizes into a rock formation known as a pluton, like the Half Dome rock structure in Yosemite (but below ground), Singer said. But some of it stays liquid and can erupt, he said.

Explosions there occur every few hundred to few thousand years, Singer said. If an explosion occurred in this region, it would be much more explosive than recent eruptions, such as those at Hawaii's Kilauea and Guatemala's Fuego volcano, which killed dozens, he said.

That's because the region's volcanoes erupt rhyolite — a type of magma that's very explosive, due to its high water and carbon dioxide content. Magma that rises up from the mantle is typically a nonexplosive basaltic type, Singer said. Some volcanoes like Hawaii's Kilauea, directly spew this type of molten rock.

But in Laguna del Maule, the mantle keeps pumping basaltic magma into underground reservoirs, where it cools and crystallizes, forming rhyolite. As more and more magma pumps into these underground pools, the magma could heat up, creating just the right conditions for explosive eruptions.

"This current episode of inflation may or may not be able to produce a modest-size eruption," Singer said. But it's really hard to predict, he added. "Even a modest or small eruption like that would be quite devastating to this area of Chile and Argentina."