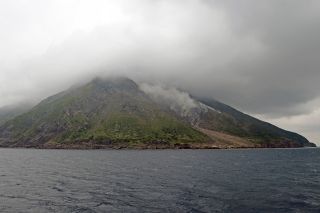 The volcanic islands of Take-shima and Satsuma Iwo-jima (shown here) are the subaerial parts of the northern rim of the Kikai caldera.
(Image: © The Yomiuri Shimbun/AP)

A giant undersea caldera near Japan hosts a lava dome made from 8 trillion gallons of molten rock.

The dome, which is 6.2 miles (10 kilometers) wide and 1,968 feet (600 meters) tall, is solid rock now, and it doesn't presage an impending eruption. However, it does add a new wrinkle to the history of the Kikai caldera, a huge depression that formed during a massive volcanic super-eruption about 6,300 or 7,300 years ago (the broad range has to do with different methods of dating the eruption). That eruption sent heated pyroclastic flow 50 miles (80 km) across the sea and spread ash up to 620 miles (1,000 km) away, said Yoshi Tatsumi, the author of a new study on the caldera's inner workings, published today (Feb. 9) in the journal Scientific Reports.

The system is still active, and it's a relatively high-risk place for eruptive activity, said Erik Klemetti, a volcanologist at Denison University, who was not involved in the study. The volcano also blew its top in super-eruptions 95,000 years ago and about 140,000 years ago. It occasionally burps ash and steam even in the modern day, with the last recorded eruption occurring between 2013 and 2014. [The 11 Biggest Volcanic Eruptions in History]

But because the caldera is hidden underwater, it's hard to keep tabs on its activity. Tatsumi and his colleagues conducted multiple remotely-operated-vehicle dives to the caldera floor, south of Kyushu Island in the Japanese archipelago. They used sonar to map the caldera's floor and shot small explosive charges into the seafloor to create seismic waves they could record and use to image the subsurface. The team also collected data on the water column's chemistry and took rock samples from the looming dome in the center of the caldera.

The findings proved that the dome was, in fact, built up from lava, specifically a form of lava called rhyolite — some 8 trillion gallons (32 cubic kilometers) of it. This dome could have formed anytime since the last eruption, Klemetti said, so it isn't clear how new it is. However, Tatsumi and his colleagues found that its chemical composition is different than the lava ejected from the caldera during the last super-eruption. This finding suggests that a new magma system formed after the eruption, Tatsumi told Live Science.

"The post-caldera activity, at least [at] this caldera, is regarded as the preparation stage to the next super-eruption, not as the calming-down stage from the previous super- eruption," he said.

That doesn't mean an eruption is imminent, but that the volcanic system that underpins the caldera has been changing and evolving over the millennia, the researchers reported. It's interesting to see that the lava dome apparently originates from a different part of the magmatic system (underground chambers of molten rock) than the last super-eruption's lavas, Klemetti said. [50 Amazing Facts About Volcanoes]

The best way to be sure the dome has a separate origin would be to test the minerals in the lavas and to find out when they formed, whether before the caldera-forming super-eruption, around the same time or after, Klemetti said. Tatsumi and his team plan to look deeper under the caldera. Given the giant size of the lava dome, there could be a large magma reservoir under the surface, Tatsumi said. The team plans to use subsurface imaging to look for that reservoir and describe it if it exists.