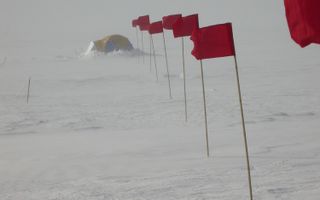 Summer at Vostok Station in Antarctica is still plenty cold, but winter atop the East Antarctic Plateau is as cold as it gets on Earth.
(Image: © Ted Scambos, NSIDC/University of Colorado-Boulder)

Scientists already knew that the lowest temperatures ever measured on Earth were on a frozen ice ridge in eastern Antarctica, near the South Pole. But they recently discovered that temperatures there can drop even lower than those previously measured.

In 2013, analysis of satellite data pinpointed scattered pockets of intensely cold air on the East Antarctic Plateau between Dome Argus and Dome Fuji — temperatures that dipped to a staggering minus 135 degrees Fahrenheit (minus 93 degrees Celsius).

However, new analysis of the same data suggests that under the right conditions, those temperatures can drop to nearly minus 148 degrees F (minus 100 degrees C), which is probably the coldest it can get on Earth, researchers reported in a new study. [In Photos: The Coldest Places on Earth]

On ice-covered Antarctica, the average temperature during the dark winter months is around minus 30 degrees F (minus 34.4 degrees C). For the new study, scientists analyzed data collected during July and August between 2004 and 2016. The temperatures were measured in small basins of the East Antarctic Plateau near the South Pole, at an elevation of 12,467 feet (3,800 meters), the highest part of the ice sheet.The new, record-breaking temperatures were widespread, appearing at 100 locations in depressions dotting "a broad region" of the plateau, the study authors reported.

During the polar winter, long stretches of time elapse with clear skies and weak winds. Together — as long as these conditions last — they can cool the snow surface and drive down temperatures, according to the study.

In 2013 and in the new study, researchers calibrated the same satellite measurements of surface temperatures with data collected from weather stations on Antarctica's surface. For the new analysis, researchers took a fresh look at the surface weather data. This time, they also factored in atmospheric dryness of the atmosphere, as drier air makes snow cover lose heat faster, lead study author Ted Scambos, a senior research scientist at the National Snow and Ice Data Center at the University of Colorado Boulder, said in a statement.

With this update, they recalibrated the satellite data and got a more accurate measure of the bone-chilling temperatures in those pockets near the South Pole. The same spots on the plateau that were previously identified as the coldest on Earth were still the coldest — only more so, by about 9 degrees F (5 degrees C), the study found.

The new record-low temperature is probably about as cold as it can get on Earth. It needs to be extremely cold and extremely dry for several days for such extreme lows to emerge, Scambos explained.

"There's a limit to how long the conditions persist to allow it to cool to these ultra-low temperatures, and a limit to how much heat you can actually get through the atmosphere, because water vapor has to be almost nonexistent in order to emit heat from the surface at these temperatures," he said.

The findings were published online June 25 in the journal Geophysical Research Letters.