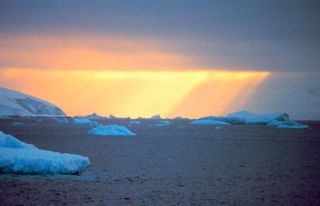 Crepuscular rays illuminate half of the sky in Antarctica.
(Image: © NOAA/Dave Mobley)

Certain astronomical myths die hard. One of these is that the entire Arctic region experiences six months of daylight and six months of darkness. Often, "night" is simply considered to be when the sun is beneath the horizon, as if twilight didn't exist.

This fallacy is repeated in innumerable geography textbooks, as well as travel articles and guides. But twilight illuminates the sky to some extent whenever the sun's upper rim is less than 18-degrees below the horizon. This marks the limit of astronomical twilight, when the sky is indeed totally dark from horizon to horizon .

There are two other types of twilight. Civil (bright) twilight exists when the sun is less than 6-degrees beneath the horizon. It is loosely defined as when most outdoor daytime activities can be continued. Some daily newspapers provide a time when you should turn on your car's headlights. That time usually corresponds to the end of civil twilight.

So even at the North Pole , while the sun disappears from view for six months beginning on Sept. 25th, to state that "total darkness" immediately sets in is hardly the case! In fact, civil twilight does not end there until Oct. 8.

So at the North Pole the duration of 24-hour darkness lasts almost 11-weeks, not six months.