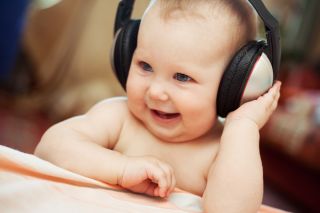 Did this little Scaramouche do the fandango in the womb? Scientists investigated.
(Image: © Shutterstock)

When Freddie Mercury sang, "Mama, life had just begun," in the second verse of "Bohemian Rhapsody," he probably didn't have an audience of fetuses in mind. Let's consider it a happy coincidence, then, that unborn babies really do seem to love Queen.

According to a new, as-yet-unpublished study by the Institut Marquès assisted-fertility clinic in Spain, fetuses exposed to "Bohemian Rhapsody" — as well as classic jams by Bach and Mozart — showed clear signs of mental stimulation in the womb. Songs by Shakira and the Bee Gees, on the other hand, proved much less interesting to the unborn audience.

Developing babies begin to hear external sounds at a gestational age of about 16 weeks, which is —it's safe to say — far too soon to have read an issue of Rolling Stone. So why should fetuses be such discerning music critics? According to the researchers, it might have something to do with the pitch of the song's sounds or the simplicity of the melody. [That's Incredible! 9 Brainy Baby Abilities]

"The first language was more musical than verbal," Dr. Marisa López-Teijón, director of the Institut Marquès, said in a statement. "We still tend instinctively to speak [to newborns] in a high-pitched voice, because we know that newborns perceive those better, and this way they understand that we want to communicate with them." (Interestingly, fetuses in the study also showed a greater response to Mickey Mouse's voice than to recordings of a normal human voice.)

In the new study, which was presented this month at the International Association for Music and Medicine conference in Barcelona, Spain, researchers blasted a variety of tunes for 300 fetuses between 18 and 38 weeks of gestation.

Using a special intravaginal speaker (babies can't hear much through the mom's abdominal wall), the team played 15 songs for each fetus, ranging from sonatas by Bach and Beethoven, to traditional Spanish Christmas carols, to the hits of Queen, Adele and the Village People.

While the fetuses listened, the researchers watched for mouth and tongue movements on an ultrasound machine. They hypothesized that the babies who moved their mouths or tongues in response to the music were having the language centers of their brains stimulated and perhaps were learning to communicate back.

"Our initial hypothesis suggests that music creates a response which manifests as vocalization movements as it activates the brain circuits that stimulate language and communication," the researchers wrote on their website.

Overall, the fetuses seemed more stimulated by classical music than pop or rock. Ninety-one percent of the babies showed mouth movements, and 73 percent stuck out their tongues when Mozart's "A Little Night Music" played. Melodies by Bach, Prokofiev and Strauss all got more than 80 percent of the fetuses flapping their itty-bitty gums.

More than 80 percent of the fetuses responded to traditional drumbeats from Africa, a mantra from India and a Christmas carol from Spain. When it came to pop, however, the burgeoning critics were far more discerning. Their favorite song was, of course, "Bohemian Rhapsody" (90 percent of babies moved their mouths, and 40 percent stuck out their tongues), followed by the Village People's "Y.M.C.A."

Songs by Adele, the Bee Gees and Shakira impressed 60 percent or less of the fetuses.

These results jibe with those of previous studies that have linked classical music (played outside the womb, not intravaginally) to infant stimulation. However, if the findings don't jibe with your personal taste in music, don't sweat it too much. Mouth and tongue movements are rare in the second and third trimesters of pregnancy, the researchers wrote, so the bottom line is that any musical stimulation is more than most babies are used to.

Besides, fetuses can't hear much over the constant noise of their mothers' hard-working bodies, anyway. The real musical education begins after birth — you know, when baby is really able to rock out.