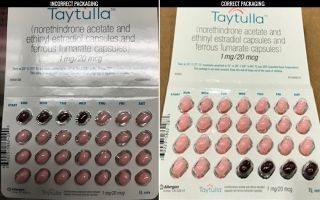 Nearly 170,000 birth control pill packs are being recalled because of an error in the packaging that could put users at risk of unintended pregnancy.

On Tuesday (May 29), the pharmaceutical company Allergan announced it was recalling 168,768 packs of Taytulla, a hormonal birth control pill that contains estrogen and progestin.

The packs contain 24 "active" pills with hormones, followed by four inactive, or placebo, pills that don't contain hormones. (Users take one pill a day for 28 days.) However, Allergan received a report from a physician that a single pack of Taytulla had a packaging error that put the placebo pills out of order. Instead of placing the placebo pills at the end of the packet, they were placed at the beginning, so the first four days of treatment had inactive pills, rather than active ones, according to the company's statement.

"As a result of this packaging error, oral contraceptive capsules, that are taken out of sequence, may place the user at risk for contraceptive failure and unintended pregnancy," the statement said. "The reversing of the order may not be apparent to either new users or previous users of the product." [7 Surprising Facts about The Pill]

Women taking birth control pills who miss taking a single active pill, or several pills, may be at higher risk of unintended pregnancy during that cycle, according to the Mayo Clinic. Women who miss two or more consecutive hormonal pills should use back-up contraception, such as condoms, or avoid sex until they've taken active pills for seven consecutive days, according to the Centers for Disease Control and Prevention.

The recalled pills were "physicians' sample packs," which are shipped directly to physicians who give them to patients, an Allergan spokesperson told Live Science; they weren't packs that were given to patients by pharmacists. Recalled pills have the lot number 5620706 and expire in May 2019.

The spokesperson said that the recall was made due to an error in a single pill pack, and so far, no other sample packs with the error have been identified, either within the recalled lot or in other lots.

Allergan is currently notifying customers about the recall by letter, and arranging for the return of all recalled products. Users who have the recalled sample pack should tell their doctor to arrange a return, the statement said.

Patients with concerns about unintended pregnancy should consult their doctor, the company said.

This isn't the first time birth control pills have been recalled. Last year, Lupin Pharmaceuticals recalled a lot of its Mibelas pills due to a similar packaging error that put inactive pills at the beginning of the pack. And in 2012, Pfizer recalled nearly 1 million birth control pills, also due to out-of-sequence placebo pills.