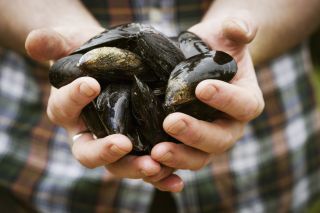 Mussels off the coast of Seattle have tested positive for opioids.

These mussels, however, were never intended to end up on the dinner table. Instead, they were used specifically to measure levels of pollution in the waters of Puget Sound, according to a May 9 statement from the Puget Sound Institute (PSI) at the University of Washington, Tacoma.

Mussels are filter feeders; to eat, the shellfish constantly sift the water around them in their hunt for bacteria or microscopic algae. But as they filter food from the water, mussels may also absorb any chemicals and pollutants floating around them, Live Science reported in 2014.

Because of this, mussels make good barometers for pollution levels.

So, every two years, scientists at the Washington Department of Fish and Wildlife (WDFW) transplant uncontaminated mussels, raised in pristine waters, to various locations in Puget Sound, according to the statement. Then, two to three months later, the scientists analyze the mussel tissues for pollutants.

This time around, the researchers detected traces of the opioid oxycodone in mussels from three of the 18 locations tested, according to CBS News. This is the first time that opioids have been detected in Puget Sound mussels, the PSI statement said.

The opioids likely come from wastewater treatment plants, according to the statement; even filtered wastewater can contain traces of pollutants. When humans ingest opioids, traces of the drug end up in the toilet, CBS News said. Therefore, traces of opioids in the water suggest that a lot of people in the area are using the drugs, Jennifer Lanksbury, a biologist at the WDFW, told CBS Seattle affiliate KIRO 7.

Andy James, a research scientist at the PSI, noted in the statement that the levels of opioids detected in the mussels were thousands of times lower than a therapeutic dose in humans and would not be expected to affect the mussels, which don't break down the drug.

It's possible, however, that the opioids could affect fish, which are known to respond to the drugs, James added.

The mussels tested came from highly urbanized areas, far from commercial shellfish beds where mussels are raised for food,  according to the PSI. "You wouldn’t want to collect (and eat) mussels from these urban bays," James said.