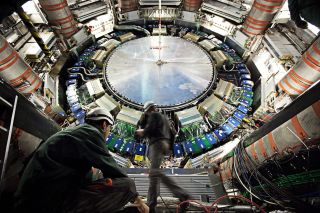 A few years from now, if a crew of physicists gets its way, a squat building will rise above the border between France and Switzerland. This warehouse-size annex will join a scientific facility so large it crosses national borders. And, if the researchers proposing the construction are correct, it just might find the missing pieces of the universe.

Separated by a few hundred vertical feet of bedrock granite from the Large Hadron Collider (LHC), the new building would contain a scientific instrument called the MATHUSLA device (Massive Timing Hodoscope for Ultra Stable Neutral Particles), named after the longest-living man in the Book of Genesis. Its job: to hunt for long-lived particles that the LHC can't detect itself.

There's something strange about the idea. The LHC is the biggest, baddest particle accelerator in the world: a 17-mile (27 kilometers) ring of superconducting magnets that, 11,245 times per second, flings a few thousand protons at one another at significant fractions of the speed of light and then, whenever anything interesting happens, records the result. [Beyond Higgs: 5 Other Particles That May Lurk in the Universe]

MATHUSLA's relationship to that enormous machine would resemble that of a harmless remora fish clinging to the side of a leviathan, sucking up stray flecks of wasted food that spill from the larger creature's open mouth. But some physicists think that through careful study of those flecks (in this case, stray, long-lived, high-energy particles flung through the walls of LHC), MATHUSLA will help solve a set of problems that the LHC has, to the increasing alarm of particle physicists, failed to conquer.

All that will happen, that is, if MATHUSLA's creators can find someone to pay for it.

The quantum universe right now is a puzzle with most of the pieces missing. Those pieces scientists have found and put together already — quarks, neutrinos, bosons, the muon and tau lepton, the photon and gluon, and, most famously, the Higgs boson — fit together to form a picture, called the Standard Model. But that picture is strangely shaped and full of holes and hints that there's more physics out there to be found.

One gap is the Higgs boson. As David Curtin, a professor at the University of Toronto and one of the originators of the MATHUSLA concept, explained, the Higgs just isn't as massive as quantum physics predicts it to be. So, the current model of the universe required a big, arbitrary-seeming "correction" in Higgs related equations.

Centuries of experience tell scientists that corrections like that usually stand in for things researchers just don't yet understand. Albert Einstein's cosmological constant was an example, an idea that he stuck into his theory of general relativity to account for what scientists later discovered were the effects of the expanding universe — something Einstein never suspected and later regretted not anticipating. [8 Ways You Can See Einstein's Theory of Relativity in Real Life]

Physicists, Curtin explained, suspect that the Higgs' strangely small mass implies that other, undetected particles are out there, influencing it. This and other strange cracks in reality — like all the missing, mysterious mass in the universe that scientists term dark matter — suggest that there's still lots of physics that physicists haven't yet seen.

The point of the LHC was to fill in those gaps in the universe's puzzle.

Jessie Shelton, a theoretical physicist at the University of Illinois at Urbana-Champaign who helped edit a white paper pitching MATHUSLA, said that so far — with the important exception of the Higgs boson detection itself — the LHC has been a disappointment. The Higgs appeared, but ever since then, even after a series of upgrades to the machine, the hunt for new particles has turned up nothing.

That could be because humans have exhausted the supply of particles that we'll ever be able to detect. Or it could be that the LHC, perhaps because of problems with its detectors or because its beam is too weak, just isn't up to the task, she said.

"There's absolutely something new out there. Dark matter tells us that. Unfortunately, we don't have any guarantee that whatever's out there has to talk to us at rates that we can detect at the LHC," Shelton told Live Science

And as long as the LHC, with costs running into the tens of billions of dollars, fails to detect new physics beyond the Higgs, she said, it'll be hard to justify building any bigger detectors in the future. [Photos: The World's Largest Atom Smasher (LHC)]

Back in April, Shelton stood in front of a crowd of physicists at the big meeting of the American Physical Society (APS) in Columbus, Ohio, and argued that the LHC might have already created missing particles but might have been unable to detect them. That's because all of the LHC's sensors are calibrated to detect a specific kind of event:

An exotic particle appears in the high-energy collision of two protons. It decays a mind-bogglingly short time later into more-stable, less-exotic particles, which streak away in all directions in a starburst. Those particles pass through ionizing plates and flashing crystals surrounding the collider's beam, and their specific pattern offers physicists clues as to what kind of exotic particle they came from.

The LHC could already pick up signatures of long-lived particles with some recalibration, Shelton said. Even a usually long-lived particle will sometimes decay quickly. And some long-lived particles may leave telltale signs in the sensors before decaying. Detecting them could be a matter of recalibrating the detectors and algorithms. Shelton called this plan using the LHC "off label." [What Is Quantum Mechanics]But perhaps, Shelton argued, the missing exotic particles don't decay as quickly as the LHC's designers hoped. Maybe speculative particles like "gluinos" and "composite dark glueballs" do exist and are appearing at the LHC but not decaying within its narrow tunnel. If a gluino, for example, can survive even a few fractions of a second longer than physicists expected, it could — moving at a significant fraction of light speed — pierce the walls of the collider, travel hundreds of yards through the solid granite burying the LHC, and make its way up into the French-Swiss sunshine before decaying somewhere alone in the forest. Its signature would, therefore, be far outside the LHC's capacity to detect. [Strange Quarks and Muons, Oh My! Nature's Tiniest Particles Dissected]

Still, these researchers think that the best hope for detecting long-lived particles lies in the woods on the French-Swiss border. MATHUSLA, essentially a 65-foot-tall (20 meters) warehouse full of particle detectors sitting on top of the LHC, would study particles that escaped the LHC entirely.

With a thick floor of granite separating the LHC beam from MATHUSLA, most of the roiling, radioactive chaos of the LHC would disappear. Only the comparatively rare pops of long-lived particles moving through the Earth and into the sensor chamber would need detecting.

"If an invisible particle comes up and decays, the visible particles [it decays into] will sort of splay against the ceiling," Curtin said. "The layers of [detectors] will see these tracks in exactly the same way as the trackers inside the LHC downstairs. But this [detector array] is much bigger, and can afford to be much slower."

"You're just waiting up there. Birds are chirping. And then, suddenly, there's a—" Curtin made the rapid rat-a-tat sound of a machine gun, or in this case, perhaps, the charged particles flung from a decaying gluino.

Because of that slow pace and larger space, Curtin said, the electronics and engineering required for MATHUSLA are much simpler than those in the LHC itself.

At the scale that he and his colleagues envision, it should come in at just a fraction of the cost of the multibillion-dollar LHC below — somewhere in the ballpark of $50 million, he said. MATHUSLA's designers hope that CERN, the European Organization for Nuclear Research, which operates the LHC, will foot the bill. But they're also hopeful about grants from non-European countries, or perhaps individual rich people.

"[The LHC] could be making these things already," he said, yelling a bit, "We've paid the price to make 'em! We've paid the $10 billion for the collider! We're already making them — maybe, I mean, you know…"

His voice drifted off for a moment, before he returned with, "How dumb would we feel if we just did not spend that extra dollar to make the detector to actually see what we made?!"

Shelton also said the LHC needs the extra detector. But she spelled out the concern bound up in that "maybe" and why she still thinks the project is justified.

"If we're being pessimistic, and we're going to say that maybe there's nothing there," she said, "I want to know that it's really not there and not missing just because we forgot to look."