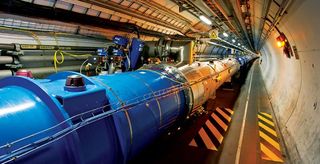 Don Lincoln is a senior scientist at the U.S. Department of Energy's Fermilab, the United States' biggest Large Hadron Collider research institution. He also writes about science for the public, including his recent "The Large Hadron Collider: The Extraordinary Story of the Higgs Boson and Other Things That Will Blow Your Mind" (Johns Hopkins University Press, 2014). You can follow him on Facebook. The opinions here are his own. Lincoln contributed this article to Live Science's Expert Voices: Op-Ed & Insights.

If you're a science groupie and would love nothing better than for a cornerstone scientific theory to be overthrown and replaced with something newer and better, then 2016 might well be your year. The world's largest particle accelerator, the Large Hadron Collider (LHC), is resuming operations after a pause during the winter months, when the cost for electricity in France is highest.

So why is it such a big deal that LHC coming back on line? It's because this is the year the accelerator will operate at something approaching its design specifications. Scientists will smash the gas pedal to the floor, crank the fire hose wide open, spin the amplifier button to eleven or enact whatever metaphor you like. This year is the first real year of full-scale LHC operations.

Now if you actually are a science groupie, you know what the LHC is and have probably heard about some of its accomplishments. You know it smashes together two beams of protons traveling at nearly the speed of light. You know scientists using the LHC found the Higgs boson. You know that this marvel is the largest scientific device ever built.

So what's different now? Well, let's go back in time to 2008, when the LHC circulated its first beams. At the time, the world's premier particle accelerator was the U.S. Department of Energy's Fermilab Tevatron, which collided beams at a whopping 2 trillion electron volts (TeV) of energy and with a beam brightness of about 2 × 1032 cm-2 s-1. The technical term for beam brightness is "instantaneous luminosity," and basically it's a density. More precisely, when a beam passes through a target, the instantaneous luminosity (L) is the number of particles per second in a beam that pass a location (ΔNB/Δt) divided by the area of the beam (A), multiplied by the number of targets (NT), L = ΔNB/Δt × (1/A) × NT. (And the target can be another beam.)

The simplest analogy that will help you understand this quantity is a light source and a magnifying glass. You can increase the "luminosity" of the light by turning up the brightness of the light source or by focusing the light more tightly. It is the same way with a beam. You can increase the instantaneous luminosity by increasing the number of beam or target particles, or by concentrating the beam into a smaller area.

The LHC was built to replace the Tevatron and trounce that machine's already-impressive performance numbers. The new accelerator was designed to collide beams at a collision energy of 14 TeV and to have a beam brightness — instantaneous luminosity — of at least 100 × 1032 cm-2 s-1. So the beam energy was to be seven times higher, and the beam brightness would increase 50- to 100-fold.

Sadly, in 2008, a design flaw was uncovered in the LHC when an electrical short caused severe damage, requiring two years to repair . Further, when the LHC actually did run, in 2010, it operated at half the design energy (7 TeV) and at a beam brightness basically the same as that of the Fermilab Tevatron. The lower energy was to give a large safety margin, as the design flaw had been only patched, not completely reengineered.

The LHC was shut down during 2013 and 2014 to retrofit the accelerator to make it safe to run at closer to design specifications. The retrofits consisted mostly of additional industrial safety measures that allowed for better monitoring of the electrical currents in the LHC. This helps ensure there are no electrical shorts and that there is sufficient venting. The venting guarantees no catastrophic ruptures of the LHC magnets (which steer the beams) in the event that cryogenic liquids — helium and nitrogen — in the magnets warm up and turn into a gas. In 2015, the LHC resumed operations, this time at 13 TeV and with a beam brightness of 40 × 1032 cm-2 s-1.

The LHC will run at 13 TeV and with a beam brightness that is expected to approach 100 × 1032 cm-2 s-1 and possibly even slightly exceed that mark. Essentially, the LHC will be running at design specifications.

In addition, there is a technical change in 2016. The protons in the LHC beams will be spread more uniformly around the ring, thus reducing the number of protons colliding simultaneously, resulting in better data that is easier to interpret.

At a technical level, this is kind of interesting. A particle beam isn't continuous like a laser beam or water coming out of a hose. Instead, the beam comes in a couple of thousand distinct "bunches." A bunch looks a little bit like a stick of uncooked spaghetti, except it is about a foot long and much thinner — about 0.3 millimeters, most of the time. These bunches travel in the huge 16-mile-long (27 kilometers) circle that is the LHC, with each bunch separated from the other bunches by a distance that (until now) has been about 50 feet (15 meters).

Because the LHC has the same number of protons but separated into more bunches, that means when two bunches cross and collide in the center of the detector, there are fewer collisions per crossing. Since most collisions are boring and low-energy affairs, having a lot of them at the same time that an interesting collision occurs just clutters up the data.

Ideally, you'd like to have only an interesting collision and no simultaneous boring ones. This change of bunch separation distance from 50 feet to 25 feet brings the data collection closer to ideal.

The unit of integrated luminosity is a pb-1. This unit is a bit confusing, but not so bad. The "b" in "pb" stands for a barn (more on that in a moment). A barn is 10-24 cm2. A picobarn (pb) is 10-36 cm2. The term "barn" is a unit of area and comes from another particle physics term called a cross section, which is related to how likely it is that two particles will interact and generate a specific outcome. Two objects that have large effective area will interact easily, while objects with a small effective area will interact rarely.

An object with an area of a barn is a square with a length of 10-12 cm. That's about the size of the nucleus of a uranium atom.

During World War II, physicists at Purdue University in Indiana were working with uranium and needed to mask their work for security reasons. So they invented the term "barn," defining it as an area about the size of a uranium nucleus. Given how big this area is in the eyes of nuclear and particle physicists, the Purdue scientists were co-opting the phrase "as big as a barn." In the luminosity world, with its units of (1/barn), small numbers mean more luminosity.

Because the accelerator had been re-configured during the 2013 to 2014 shutdown, the luminosity was lower in 2015, coming in at 4,200 pb-1, although, of course, at the much higher beam energy. The 2016 projection could be as high as 35,000 pb-1. The predicted increase merely reflects the accelerator operators' increased confidence in their ability to operate the facility.

This means in 2016, we could actually record eight times as much data as we did in 2015. And it is expected that 2017 will bring even higher performance.

Let's think about what these improvements mean. When LHC first collided beams, in 2010, the Higgs boson was still to be observed. On the other hand, the particle was already predicted, and there was good circumstantial evidence to expect that the Higgs would be discovered. And, without a doubt, it must be admitted that the discovery of the Higgs boson was an enormous scientific triumph.

But confirming previously predicted particles, no matter how impressive, is not why the LHC was built.

Scientists' current theory of the particle world is called the Standard Model, and it was developed in the late 1960s, half a century ago. While it is an incredibly successful theory, it is known to have holes. Although it explains why particles have mass, it doesn't explain why some particles have more mass than others. It doesn't explain why there are so many fundamental particles, given that only a handful of them are needed to constitute the ordinary matter of atoms and puppies and pizzas. It doesn't explain why the universe is composed solely of matter, when the theory predicts that matter and antimatter should exist in equal quantities. It doesn't identify dark matter, which is five times more prevalent than ordinary matter and is necessary to explain why galaxies rotate in a stately manner and don't rip themselves apart.

When you get right down to it, there is a lot the Standard Model doesn't explain. And while there are tons of ideas about new and improved theories that could replace it, ideas are cheap. The trick is to find out which idea is right.

That's where the LHC comes in. The LHC can explore what happens if we expose matter to more and more severe conditions. Using Einstein's equation E = mc2, we can see how the high-collision energies only achievable in the LHC are converted into forms of matter never before seen. We can sift through the LHC data to find clues that point us in the right direction to hopefully figure out the next bigger and more effective theory. We can take another step toward our ultimate goal of finding a theory of everything.

With the LHC now operating at essentially design spec, we can finally use the machine to do what we built it for: to explore new realms, to investigate phenomena never before seen and, stealing a line from my favorite television show, "to boldly go where no one has gone before." We scientists are excited. We're giddy. We're pumped. In fact, there can be but one way to express how we view this upcoming year: