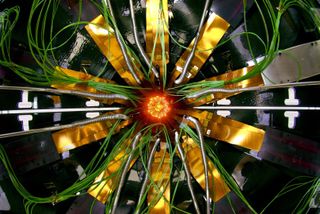 The ALICE experiment at the Large Hadron Collider studies heavy-ion collisions in search of a quark-gluon soup similar to the state of the early universe.
(Image: © CERN)

Particle physicists have the coolest job: smashing subatomic particles together at insane speeds to unravel the mysteries of the universe.

Atom smashers, or particle accelerators, collide particles with atoms or other subatomic particles at close to light speed, creating new particles and radiation that tell scientists about the building blocks of matter.

"Our goal is always to understand how the world is put together," said Roger Dixon, head of the accelerator division at Fermi National Accelerator Laboratory (Fermilab) in Batavia, Ill.

When people talk about atom smashing, they're usually referring to the giant particle accelerators in underground physics labs around the world. But in fact, some televisions are even particle accelerators. The term "the tube" gets its name from cathode ray tubes, vacuum tubes that shoot an electron beam at a fluorescent screen. The electrons collide with the phosphor molecules in the screen, producing a spot of light, or pixel.

Giant atom smashers operate by a similar principle, but on a much larger scale. The particles travel much faster and the collisions produce more subatomic particles and radiation — converting energy into mass, as described by Einstein's famous E=mc^2 equation. [Wacky Physics: The Coolest Little Particles in Nature]

The world's largest, most powerful accelerator is the Large Hadron Collider (LHC) synchrotron at CERN, in Geneva. Buried 574 feet (175 meters) beneath the French-Swiss border, the LHC snakes 17 miles (27 kilometers) in circumference. Being underground shields the accelerator from cosmic radiation, which can produce stray particles that confuse the experiments.

Inside the LHC, two proton beams whip around the tunnel in opposite directions, sped up by many radiofrequency cavities. The cavities produce an electric field in the same direction as the particles, giving the particles a kick of energy as they zoom around, Myers said — much like a parent pushing a child on a playground roundabout.

Each beam travels in its own tube, which is kept at ultrahigh vacuum (lower air pressure than the moon's surface). The beams are steered by an 8.3-tesla superconducting electromagnet, which is about 100,000 times the strength of the Earth's magnetic field. The magnets are cooled to a temperature of 2 Kelvin, or -456 Fahrenheit (-271 C) using the world's largest cryogenic system. [Photos: The World's Largest Atom Smasher (LHC)]

When the accelerated protons collide, detectors "see" the resulting particles and radiation they produce.

Scientists use the LHC to recreate the conditions immediately following the Big Bang. In July 2012, the LHC drew international attention when scientists reported the discovery of the Higgs boson, the particle thought to explain how other particles get their mass.

"We wouldn't be here, we wouldn't have mass, we wouldn't exist without this particle," said Steve Myers, the director for accelerators and technology at CERN. Finding it was "like looking for a needle in a million haystacks," Myers said. [Gallery: Search for the Higgs Boson]

The LHC was shut down in 2013 to upgrade its beam energy, and is scheduled to reopen in early 2015.

In the United States, Fermilab houses the world's second largest particle accelerator, the Tevatron. Before it was shut down in 2011, the Tevatron was the first accelerator to use superconducting electromagnets, and was used to discover a new subatomic particle known as the top quark.

Fermilab's Main Injector to the Tevatron is still operational, and scientists use it to send a beam of neutrinos, or ghostly particles that rarely interact with normal matter, to an underground mine in Minnesota 455 miles (732 km) away. Fermilab's main injector is part of a chain of connected particle accelerators that (used to lead) to the Tevatron. It accelerates protons and antiprotons which get fed into the Tevatron.

In the future, Fermilab's engineers hope to make a linear accelerator that uses superconducting radiofrequency cavities, which are metallic chambers that produce the electric fields needed to accelerate particles to high energies.

The only U.S. particle collider currently in operation is the Relativistic Heavy Ion Collider (RHIC) at Brookhaven National Laboratory in Upton, N.Y.

These machines are "nothing but flashlights that are getting more and more powerful," said Dixon, Fermilab's head of the accelerator division. "When you make the energy higher and higher, you see finer and finer details of matter and how it's put together," Dixon said.

Take the Stanford Linear Accelerator, or SLAC, in Menlo Park, Calif. At 2 miles (3.2 km) long, SLAC's main linear accelerator is the longest in the world. It produces electrons using a radio frequency ion source to accelerate electrons and positrons (the antimatter counterparts of electrons) up to 50 GeV.

But these accelerators are limited by the voltage that can be applied before they suffer electrical breakdown. Now, researchers at the University of Texas at Austin and elsewhere are developing a completely different kind of accelerator — that can fit on a tabletop.

These tabletop accelerators pulse a laser at helium gas to create plasma, a high-energy state of matter in which the atoms are stripped of their electrons. "A plasma, by definition, is already broken down and as fully damaged as a material can be, and therefore has no breakdown limit," said physicist Michael Downer, leader of the UT Austin team.

At much lower energies, particle accelerators are commonly used in medicine. Particle therapy is used to treat cancer, using beams of high-energy protons or other particles.