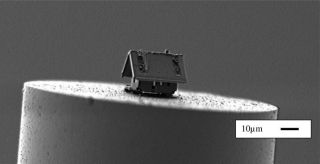 This handsome French chalet is only 15 micrometers long — about the breadth of a single strand of hair.
(Image: © Jean-Yves Rauch/Journal of Vacuum Science & Technology/CC by 4.0)

Pushing the tiny-house movement to bizarre new limits, French scientists have constructed the "world's smallest house" on the tip of an optical fiber.

With each wall spanning about 0.0006 inches in length (15 micrometers, or 15 millionths of a meter), the humble chalet is too small to accommodate a dust mite, an amoeba or a sperm cell. It's about 10,000 times too small to host a tardigrade; it's even too small to hold a piece of tardigrade poop. [8 Reasons Why We Love Tardigrades]

So, why build a house so small that even a tardigrade can't make use of it? Mainly just to prove it can be done. According to a new paper published in the May issue of the Journal of Vacuum Science and Technology, this project was a test of a new nanoconstruction platform known as the MicroRobotex (or μRobotex) station — a high-tech rig built at the Femto-ST Institute in Besançon, France, with the sole purpose of affixing microscopic, 3D components onto ridiculously small surfaces.

"We decided to build the microhouse on the fiber to show that we are able to realize these microsystem assemblies on top of an optical fiber with high accuracy," study author Jean-Yves Rauch, a researcher at the Femto-ST Institute, said in a statement.

The fabrication station combines a focused ion beam (which uses charged particles to cut and bend micron-thin sheets of construction materials) with a gas injection system to stick those pieces together, and a set of tiny robot arms capable of maneuvering components with exceptional accuracy. Taken together, the rig allows researchers to build three-dimensional structures on the tips of optical fibers — a construction area of just 0.0001 square inches (300 micrometers by 300 micrometers).

Using this high-tech construction kit, the team members built their teeny, tiny house the same way you might build a cube out of construction paper (only with much, much more expensive scissors). Each surface of the house was etched onto a single sheet of micron-thin silica crystal; cut free with an ion beam; and then folded into place, origami-style, with some help from the team's tiny robot helpers.

The finished chalet has four walls, seven windows and an intricately tiled roof. It even has a little chimney on top, because "it snows in winter and it is cold"in Besançon, the researchers wrote in the study.

While the teeny house may seem like a frivolous application of such advanced technology, this piece of microscopic real estate is merely a proof of concept, the researchers wrote. The team has already moved on to constructing new microstructures that could enable optical fibers to detect radiation levels in jet engines or viral molecules in blood vessels. It may not help put a roof over any tardigrade heads — but honestly, they'll probably be fine without it.