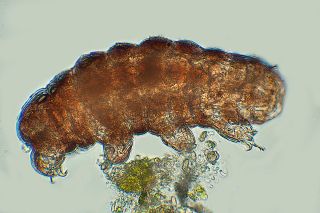 Here are some things that are true about tardigrades: They're tiny, measuring between 0.05 millimeters to 1.2 mm (0.002 to 0.05 inches) long, right on the edge of visible. They're not one species, but a whole phylum of animals. (A phylum is a broad category; There are just 32 phyla in the animal kingdom.) They're incredibly common in wet soil. And they're among the hardiest creatures on Earth, able to survive dehydration, blasts of radiation, and intense swings in temperature.

Here's something else that's apparently true about them: They take great big poops.

Tessa Montague, a recent PhD graduate of Harvard's Department of Molecular and Cellular Biology, posted a video on Twitter of a tardigrade, well, taking a huge poo. The little animal has a large dark mass in its digestive tract, about a third of its total length. And in the remarkably clear video Montague posted, the poop passes out of the tardigrade's rectum, then it kicks all eight of its little legs to squirm away from it. Its two rear legs scrabble at the poo as it moves.

Live Science reached out by email with a few questions for Montague about the video and tardigrade poop, and her answers are printed below, lightly edited for clarity.

Live Science: About how often do tardigrades poop?

Tessa Montague: I have no idea. The scientist who provided me with the tardigrades, Bob Goldstein (a prof at UNC Chapel Hill), had not yet borne witness to tardigrade defecation when I showed him this video, so that would suggest this kind of pooping doesn’t happen very often.

LS: Are the poops always this big compared to their bodies?

Montague: Yes (n=2) [this means she's only seen two examples]. There is one other tardigrade pooping video online, and that poop was also very large. Interestingly, that tardigrade seemed to struggle to relieve itself more than mine did. There might be a technical explanation: My tardigrade was lightly pressed between two cover slips to keep it from moving out of the frame of the microscope, so it’s possible that by doing this, I added a little extra oomph to the poop release. Hopefully the tardigrade felt as relieved as I did watching it.

LS: Do we know how much they weigh?

Montague: No, afraid not. The tardigrade is about 0.2 mm (0.008 inches) long, so perhaps you could calculate an approximate biomass for the poop.

LS: What are the poops made up of?

Montague: Tardigrades eat lichens, algae etc. so the poop was probably partially digested lichen. I captured this footage using a phase contrast setting on the microscope, so it’s in black and white. In full technicolor, the poop is bright green!

LS: Is there anything else you think readers should know about tardigrades and their poops?

Montague: Apparently some tardigrades only poop when they molt. Not this guy. This species molts when it lays eggs.