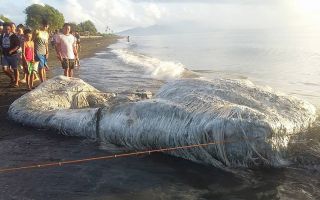 This hairy sea monster may, in fact, be a decaying whale.
(Image: © ViralPress)

It came from the depths of the ocean and has since mystified onlookers: the decaying, truck-size body of a hairy sea monster.

What it is, no one can yet say. But the beast, which washed ashore on a beach in the Philippine province of Oriental Mindoro on May 11, is likely the remains of a whale, fishery law enforcement officer Vox Krusada told The Sun. However, DNA testing is needed to pinpoint the exact species, Krusada said. [13 Bizarre Things That Washed Up on Beaches]

Until the species is officially identified, people are calling the 20-foot-long (6 meters), grayish and white carcass the "globster." And, like any rotting corpse, it smells terrible.

"I really experienced the full power of its smell because I'm the one who took the tissue samples," Krusada told The Sun. "I almost puked. I felt better after taking a bath, but the stench still lingers in my nose."

The globster is about 4 feet (1.2 m) wide at one end and about 2 feet (0.6 m) wide at the other, The Sun reported. Passersby posted a video of it on YouTube before the Bureau of Fisheries and Aquatic Resources disposed of the animal, The Sun noted.

National Geographic also posted a video (see below) of yet another so-called sea monster that washed ashore on the Indonesian island of Seram in May 2017. This bizarre, 49-foot-long (15 m) creature was definitely a baleen whale — possibly a Bryde's whale, blue whale or fin whale, Live Science previously reported.

It's not uncommon for whale remains to mystify the public. Earlier this year, whale watchers boating off the coast of Hawaii saw a goopy mass that turned out to be a humpback whale placenta, Live Science previously reported.