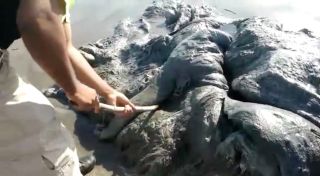 In a still frame from a video, an Acapulco official examines the strange mass that washed up on Bonfil Beach on March 9, 2016.
(Image: © Protección Civil y Bomberos de Acapulco)

A large, shapeless, gray mass that recently washed ashore on a Mexican beach had officials and observers alike scratching their heads over what in the world the thing could be. People guessed it might be a giant squid, a type of whale or perhaps some sort of unknown, monstrous creature.

But according to a marine mammals expert, the jumbled and untidy pile of grayish skin and flesh is likely part of a sperm whale's head.

Representatives of the Protección Civil y Bomberos de Acapulco (Civil Protection and Firefighters Department in Acapulco) discovered the peculiar object on Bonfil Beach, and described it as measuring about 13 feet (4 meters) in length, according to a report by the Mexican news site 24 Hours. [Release the Kraken! Giant Squid Photos]

Sabas de la Rosa Camacho, an official with the Acapulco department, told 24 Hours in a phone interview that the department received a notification about the strange object on the beach at 4 p.m. local time on March 9. He speculated that strong currents related to recent bad weather had brought it to shore. Video posted by department officials on Facebook show a uniformed man with a stick lifting the mass's folds and poking at it in several places.

While the mystery object was assumed to be the remains of a decomposing marine animal, de la Rosa Camacho noted that it did not have a strong or unpleasant smell. And though the investigation revealed bones within the heap, officials could not identify what type of animal it was, he said.

Though it's tempting to assign a monstrous identity to this unfamiliar object, the most probable explanation is that it's the top half of the head mass for a sperm whale, said James Mead, curator emeritus of marine mammals at the National Museum of Natural History in Washington, D.C.

In sperm whales, the roomy top part of the head is divided into two main regions, Mead told Live Science in an email. The top area is occupied by the spermaceti organ, a holding container for a waxy liquid that helps the whale with echolocation. In the bottom area is what's known as "the junk," which is mostly connective tissue.

Mead explained that the flesh pile on the beach is probably a sperm whale's junk and the top part of the head minus the spermaceti organ.

"The junk has separated from the skull, and you can see about midway through the video the nasal plugs, which form the valve that closes the bony narial [nasal] tube," Mead said.

He suggested that the length approximation for the mass, 13 feet (4 m), represented the junk stretched out. Its relaxed length would be about 10 feet (3 m), "which would mean that it had come from a sperm whale that was on the order of about 30 to 40 feet [9 to 12 meters] long," he told Live Science.