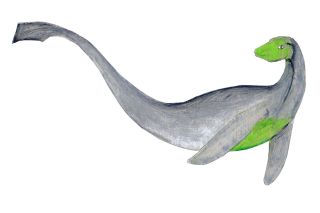 A drawing of Altamaha-ha, a creature that, according to folklore, lives near the Altamaha River in southeastern Georgia.
(Image: © Carnby/CC 4.0)

A bizarre, possibly decapitated sea creature with a long tail that washed ashore in southeastern Georgia has mystified marine experts.

Is it a dead frilled shark? Or a decayed whale or an oarfish?

Or is it a hoax depicting the legendary Altamaha-ha, a Loch Ness monster-like beast said to live near Georgia's Altamaha River? [The 10 Weirdest Sea Monsters]

"It's definitely interesting," said Jason Lee, the program manager for the nongame conservation section of the Georgia Department of Natural Resources. "It is what appears to be a strange creature that has washed up on one of our local islands."

Boater Jeff Warren and his son discovered the strange, dead creature on Friday (March 16) at Wolf Island National Wildlife Refuge in Golden Isles, Georgia, according to Action News Jax, a local news station. Initially, they thought the creature was a dead seal, but a closer look revealed that it appeared to be a "Loch Ness-type thing," Warren told Action News Jax.

Early estimates put the creature at up to 5 feet (1.5 meters) long, but by looking at the picture — shown here — Lee said it was likely smaller, probably about 1.5 feet (0.5 m) long.

"It's a small animal, or part of an animal," Lee told Live Science.

The tail of the creature looks like that of a frilled shark (Chlamydoselachus anguineus), a deepwater shark that has rows of pointy, frill-like teeth, Lee said. It's so rare to see a frilled shark that the news of one caught unintentionally by fishermen off the coast of Portugal last year made headlines, Live Science reported.

If it is a frilled shark, it would likely be a young (and decapitated) one because it is so small, Lee said. But the frilled-shark hypothesis is hard to verify. It would be easier to identify the critter if the photographer had taken multiple pictures from different angles, rather than just one photo and a video taken from the same angle, Lee said. It would also have helped the ID process if the photographer had bagged the animal, or even part of it, for a DNA analysis, Lee said.

Whatever it is, it's not a cetacean, a group that includes whales, dolphins and porpoises, said Uko Gorter, a scientific illustrator and president of the American Cetacean Society. It's worth asking, however, as weird, blobby sea monsters that have washed ashore in the past have turned out to be whale remains, including a shapeless gray mass on a Mexican beach and a decomposing creature on a remote Indonesian beach that was oozing a mysterious red fluid in 2017, Live Science previously reported.

Nor does the mysterious creature look like any kind of marine mammal, an oarfish or a type of eel, Gorter said.

"It is strange looking," Gorter told Live Science in an email. "The photo and video are not very clear (even blurred). As no other images exist, it may possibly be a hoax." [In Images: Ancient Maps and Sea Monsters]

According to local legend, the creature could be Altamaha-ha. "The legend is similar to the Loch Ness monster in its description of a snake-like beast," Lee said. "It goes in and out of the murky waters, popping up here and there."

The legend is well enough established that Georgia's Darien-McIntosh County Chamber and Visitor Center boasts a fantastical Altamaha-ha logo, which you can see on its website. And an amused Lee pointed out, "You have to admit, the carcass is pretty close to what you would expect of a baby Altamaha-ha."

Most people don't take the Altamaha-ha legend seriously, "but some do, and that may have been the reasoning behind this [photo]," Lee said.

Of course, it's possible, but unlikely, that the odd beast is a previously unknown deep-sea animal.

"I can't say there's not something out there we haven't discovered," Lee said. "This creature, though, does not really look like it has the ability to survive deep-sea conditions. You've got to have certain gelatinous qualities to stay down deep for that long."

Editor's Note: This story was updated to say that Darien-McIntosh County is in Georgia.