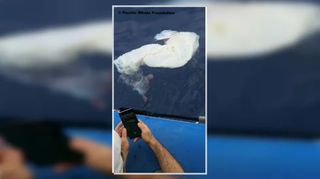 Whale watchers cruising off the coast of Hawaii came across something that looked like a giant, used tissue floating in the water this month. But you wouldn't want to blow your nose into this wet blob — according to the Pacific Whale Foundation, the goopy mass of floating white matter was a placenta, likely belonging to a humpback whale.

That's a big deal, according to the foundation, because although scientists have long assumed that humpbacks travel to Hawaiian waters to give birth, no such birth has ever been definitively documented. (Whale Trust, another Hawaiian conservation and research group, confirms that claim.)

It's not entirely clear where or when the foundation's boat, called Ocean Journey, came across the placenta. The organization said the time, place and circumstances "surrounding the discovery are still being determined," but in a Facebook post, the group later suggested the discovery happened on the first whalewatch of the day on Saturday — apparently referring to Feb. 10. [In Photos: Tracking Humpback Whales]

"Humpback whale placenta would perhaps be the next best evidence of the birthing process taking place," aside from documenting an actual birth, Pacific Whale Foundation representatives wrote. "Scientists infer that the placenta is easily dislodged after the calf is born, and then simply floats away," they added.

Rosie Williams, a whale researcher and doctoral student at the National Environment Research Council Doctoral Training Partnership in London, said the find is entirely credible based on researchers' understanding of humpback migration patterns.

However, this isn't the first time a whale placenta has been found in Hawaiian waters, she noted in an email to Live Science.

A similar large mass turned up near Hawaii back in 1994 and was confirmed, using hormone analysis, to be a humpback whale placenta. (What's more, the mass was found floating next to a newborn humpback.) This discovery was published in the journal Marine Mammal Science in 1997.

Though a whale placenta has been found in Hawaiian waters before, "this is still an exciting discovery, and if samples have been taken, then there is great potential to try and understand more about reproduction in these fascinating animals," Williams said.

The foundation did not immediately return a request from Live Science for more information.