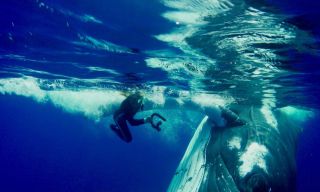 A humpback whale nudged and prodded marine biologist Nan Hauser for 10 minutes before she realized it may have been protecting her from an even more dangerous predator.
(Image: © Nan Hauser/Caters)

Would you let a humpback whale beat you up to save your life?

Marine biologist Nan Hauser did not realize she was answering this question last October when a giant, perhaps 50,000-pound (22,700 kilograms) humpback swam up to her in the waters off the Cook Islands, and began lifting her out of the ocean with its massive head. Over the tense 10 minutes that followed, Hauser swam calmly around the whale as it nudged her with its head, bumped her with its belly, and swiped at her with its powerful pectoral fins.

"I've spent 28 years underwater with whales, and have never had a whale so tactile and so insistent on putting me on his head, or belly, or back, or, most of all, trying to tuck me under his huge pectoral fin," Hauser, president of the Cook Islands-based Center for Cetacean Research and Conservation, told the Daily Mirror.

"If he rammed me too hard, or hit me with his flippers or tail, that would break my bones and rupture my organs. If he held me under his pectoral fin, I would have drowned … I was sure that it was most likely going to be a deadly encounter."

Hauser was nearly right, but not in the way she thought. Only after finally surfacing and returning to her team's research vessel did she notice another unexpected visitor swimming nearby: a 15-foot-long tiger shark, lurking on the other side of the whale.

Amazingly, Hauser and her team caught the entire encounter on video, which she shared for the first time Monday (Jan. 8). The footage, she is now sure, shows that the heroic humpback is not trying to attack her, but is shielding her instead from an even deadlier shark.

This is not the first time a humpback whale has been observed intervening in a would-be marine ambush — in fact, the humpback's so-called "altruism" is well-documented.

In 2009, for example, marine biologist Robert Pitman snapped an incredible photo of a humpback cradling a Weddell seal to its chest while rolling out of the water, shielding the seal from a group of hungry killer whales.

Pitman went on to analyze 115 interactions between humpbacks and killer whales between 1951 and 2012, and determined the act of seal-saving derring-do he witnessed was hardly a freak occurrence. Humpbacks, Pitman wrote, frequently band together and sometimes travel great distances to interrupt killer whale attacks, regardless of what type of animal the orca is attacking. [In Photos: Tracking Humpback Whales]

The humpback's shielding impulse likely comes from an instinct to protect its own calves from predators, Pitman said. Because massive humpbacks have little to fear from orcas, the risk of intervening in or even initiating a fight to save their young may be well worth the risk.

"A simple behavioral rule like 'interfere with attacking killer whales' may prevent a related calf from being killed," Pitman previously told Live Science, "and it may also help out other species at times. I think we need to consider the possibility that altruism can be unintentional and arise out of self-interest."

Researchers again caught a glimpse of a humpback's seeming altruism in May 2017, when a group of the cetacean crusaders interrupted a pod of killer whales that were stalking some baby gray whales off Monterey Bay in California.

Hauser thinks it's likely that the whale that head-butted her was similarly trying to protect her from the predator in their midst (she later learned that, while one humpback was focused on her, another was swatting the water near the tiger shark, seemingly keeping it at bay). However, this marks the first known instance of a humpback intervening to shield a human from a shark, Hauser said.

Whether the humpback's heroics were instinct, accident or altruism, Hauser was quick to show her gratitude. At the end of the video, the whale surfaces just as Hauser — a bit scraped and bruised from their encounter, but in overall fit shape — climbs back aboard her team's boat. As if checking in with her, the whale blasts a quick gout of water into the air from its blowhole.