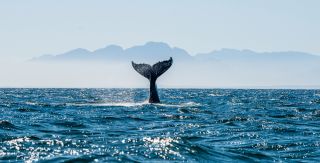 We hope you enjoyed this tale about tails.
(Image: © Sergey Uryadnikov/Shutterstock)

The graceful whale swims by undulating its wide tail up and down. And so does the shark, right?

Like other fish, sharks swim by moving their tails side to side. So, why do these two marine creatures — the shark and the whale — swim in such different ways? [What's the World's Largest Whale?]

Whales move their tails up and down because they evolved from mammals about 50 million years ago, said Kenneth Lacovara, a professor of paleontology and geology and the dean of the School of Earth & Environment at Rowan University in Glassboro, New Jersey.

"When quadrupedal [four-legged] mammals run, their spine flexes up and down," Lacovara told Live Science. Whales retained this anatomy, which allows them to gallop underwater, so to speak, Lacovara said.

The oldest known relation in the modern whale lineage is Pakicetus attocki, a four-legged, wolf-size mammal that likely had webbed feet. P. attocki lived on the edges of a shallow ocean and chowed down on fish about 50 million years ago, Live Science previously reported.

As evolution progressed, the lineage that led to whales became more, for lack of a better term, whale-like. For instance, the 35-million-year-old Basilosaurus lived in the water and measured about 60 feet (18 meters) long, as long as a bowling lane. However, the animal still had tiny, dog-size hind limbs, a remnant of its quadrupedal past, according to PastTime.org.

"[The limbs] were on their way to becoming vestigial appendages," Lacovara said. But, even as these vestigial limbs disappeared, whales were "retaining that same musculature that they got from their quadrupedal ancestors," he said.

In fact, many modern reptiles, such as lizards and snakes, still move in a side-to-side shimmy. As ancient animals evolved, some developed an up-and-down motion as their muscles and bones changed over time, Lacovara said.

This change didn't affect every animal, however. For instance, the mosasaur, an ancient sea reptile that lived during the dinosaur age, swam with a side-to-side stroke, even though its ancestors once lived on land. "Their ancestors probably hadn't shed that side-to-side motion" while they were terrestrial, Lacovara said.

In contrast, dinosaurs developed an up-and-down step, which is part of the reason for their success, as it helped them move faster than their lizard-like reptilian ancestors and crocodilian cousins, Lacovara said. Dinosaurs didn't move like lizards at all, he said. Rather, their limbs were under their bodies, "more like a horse than like a lizard, and their feet were hinged for straight-ahead motion."

However, for movement in the water, neither the side-to-side nor the up-and-down motion seems to offer an obvious advantage, Lacovara said. If one of those options were superior, there would be an evolutionary pressure to change, and there isn't an "evolutionary pressure to switch from an up-and-down motion to side-to-side motion [or vice versa]," he said.