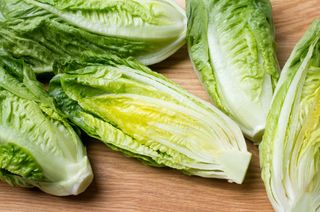 Romaine lettuce tied to a recent outbreak of E. coli is likely no longer on store shelves or in restaurants, the Centers for Disease Control and Prevention said today (May 16).

That means that the agency is no longer advising consumers to avoid buying romaine lettuce in connection with the outbreak.

But the last shipments of romaine lettuce from Yuma were harvested on April 16, according to the Food and Drug Administration. This means that any romaine lettuce from the region that found its way to stores or restaurants is likely now past its 21-day shelf life. But because it takes two to three weeks from when a person gets sick with E. coli to when the case is reported to the CDC, the number of cases may still increase, reflecting cases that occurred when the tainted romaine was still available.

So, is romaine "safe" again?

Benjamin Chapman, an associate professor and food safety specialist at North Carolina State University, noted that there's always some level of risk of foodborne illness tied to romaine and other leafy greens, in part because they're usually eaten raw.

"Romaine now is no safer or less safe than before this outbreak," Chapman told Live Science in a May 10 interview.

Since 1995, there have been 78 outbreaks linked to leafy greens, he said.

The CDC said that consumers should speak with their doctor if they have symptoms of an E. coli infection, which include diarrhea, severe stomach cramps and vomiting.