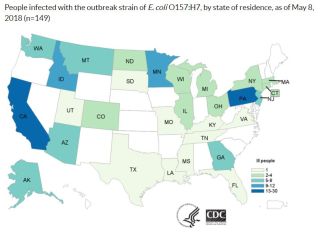 The E. coli outbreak tied to romaine lettuce seems to keep getting bigger: Just this past week, an additional 28 illnesses tied to the outbreak were reported, bringing the total to 149 cases in 29 states, according to the Centers for Disease Control and Prevention (CDC).

But why are we still seeing cases, even though production of romaine lettuce from Yuma, Arizona — where the contaminated lettuce appears to have originated — has ceased?

Benjamin Chapman, an associate professor and food safety specialist at North Carolina State University, said it's not surprising that additional illnesses tied to this outbreak are still being reported. [Top 7 Germs in Food That Make You Sick]

Chapman pointed out that the outbreak's connection to romaine lettuce from Yuma was first announced on April 13. However, some of the "new" cases are illnesses that happened earlier — back in March or early April — but are only now being reported. It takes time for illnesses to be confirmed, entered into a database and matched up with the "outbreak" strain of E. coli, leading to a lag between when cases happen and when they are reported, Chapman told Live Science.

In addition, some people may have fallen ill after April 13 because they bought romaine before the outbreak was announced and the product was still in their refrigerators, Chapman said. According to the Food and Drug Administration (FDA), romaine lettuce has a shelf life of 21 days.

What's more, it can take up to 72 hours for people to show symptoms of E. coli food poisoning, Chapman said, and then it may be several more days before the illness is confirmed as E. coli.

According to the latest CDC data, the most-recent E. coli illnesses related to this outbreak started on April 25.

Still, it would be surprising if additional illnesses are reported with start dates in May, because that would be three weeks after the outbreak announcement and really "stretching out the shelf life of the product," Chapman said.

However, it's unlikely that newly contaminated lettuce tied to this outbreak entered the market after April 13, he added.

So far, a few of the illnesses in this outbreak were linked to romaine lettuce from Harrison Farms in Yuma, according to the FDA. These cases occurred in Alaska and were tied to whole-head romaine. But the rest of the cases in this outbreak were not linked to whole-head romaine from Harrison Farm; indeed, most of the cases involved chopped romaine, and so the FDA is still trying to pinpoint the precise source of romaine involved in these cases. The agency said in a recent statement that it has "identified dozens of other fields as possible sources" for these cases.

Chapman said a common source of irrigation water could have contaminated multiple fields in the area.

The CDC continues to recommend that consumers do not eat or buy romaine lettuce unless they can confirm that it is not from the Yuma region.