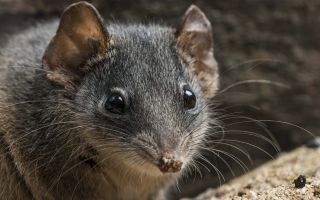 A type of marsupial dies in droves during mating season, but the tiny mammals currently face a much greater threat to their survival: humans.

Two species of Antechinus — a genus of shrew-like animals known for marathon mating sessions that leave the males crippled, spent and dying — were recently added to the Australian endangered species list, representatives of the Queensland University of Technology (QUT) reported in a statement.

Antechinuses, which are only found in Australia, New Guinea and Tasmania, are known for an unusual and extreme mating strategy known as suicidal reproduction. During breeding season, the animals frantically copulate for up to 14 hours at a time and expire from exhaustion, injuries and organ failure in a matter of weeks, leading to annual mass die-offs of antechinus males.

But the carnage of antechinus mating isn't why the two species are facing an uncertain future. Rather, they inhabit high-altitude forest habitats, where these animals face growing threats of wildfires, predation from invasive species such as cats and foxes, and habitat disturbance from cattle and feral pigs, the TSCC reported.

Both the silver-headed antechinus and the dusky antechinus were found high up on mountains in southeastern Australia; they were probably driven to the misty summits by changing environmental conditions, Andrew Baker, one of the researchers who discovered the two species, and a senior lecturer with QUT's science and engineering department, said in the statement.

"They have likely retreated there as the climate has warmed, and there is now nowhere left for them to go," he said in the statement.

As yet, no official recovery plans have been outlined to help the tiny marsupials or to conserve their threatened habitats, according to the TSCC report. However, the new position on the official endangered species list will raise awareness about the antechinuses' plight, and could lay important groundwork for future efforts to legislate their protection, Baker said.

"If we take immediate action, hopefully in time we will see the antechinus removed from the endangered list," Baker said.