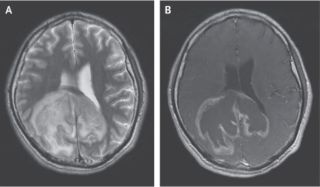 A large mass in a man's brain was due to an infection with the parasite Trypanosoma cruzi.
(Image: © The New England Journal of Medicine ©2018)

A large mass in a man's brain turned out to have an unusual cause: a parasitic infection lurking in his body that had "reawakened" in his brain, according to a new report of the case.

The 31-year-old man went the emergency room after he showed signs of confusion and had trouble walking. He also had a headache and a fever. The man had immigrated to the U.S. from El Salvador six years earlier, and had recently been diagnosed with an HIV infection and AIDS, according to the report from doctors at Stanford University.

When doctors took a sample of fluid from the brain mass and analyzed it under a microscope, they spotted dozens of small organisms inside macrophages — immune cells that gobble up foreign substances. [27 Oddest Medical Cases]

Genetic sequencing revealed that the man had an infection caused by Trypanosoma cruzi, a parasite that's found mainly in rural areas of Latin America that causes Chagas disease, according to the report, published today (May 9) in the New England Journal of Medicine.

People typically catch the disease when they are bitten by insects called triatomine bugs, also known as "kissing bugs," which carry the parasite, according to the Centers for Disease Control and Prevention (CDC).

Chagas disease has two phases, an acute phase and a chronic phase. During the acute phase — which happens right as a person is infected and lasts a few months — people may have mild symptoms, such as fever, fatigue, body aches and swelling of the eyelids, according to the CDC. During the chronic phase, the parasites may remain "hidden" in the body for decades, or even a lifetime, without causing further symptoms.

But about 30 percent of people with chronic Chagas disease will eventually develop health complications — typically heart problems or digestive problems.

Doctors treated the man with an anti-parasitic medication called benznidazole and initiated antiviral therapy for his HIV infection. After two weeks of treatment, the man showed improvement in his mental state and walking ability, the report said.