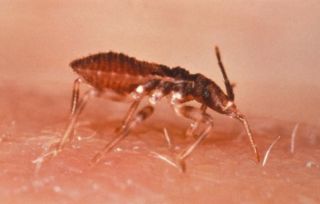 New cases of Chagas disease, a parasitic infection, occur almost exclusively in Latin America, but a new study suggests transmission of the disease may be less rare in the United States than thought.

While the Centers for Disease Control and Prevention estimates that 300,000 people in the U.S. have Chagas disease, it says most of them had already contracted it before coming to the country.  Only seven new cases of Chagas disease have been documented in the United States.

For their study, researchers analyzed blood from 13 insects that carry the Chagas disease-causing parasite and transmit it when they bite. The insects, triatomine bugs, were collected from cities in Arizona and Southern California.

The researchers found that five of the bugs had fed on human blood — a surprisingly high result, given the scarcity of new U.S. cases.

"There might be cases out there that people haven't detected," said study researcher Lori Stevens, a biologist at the University of Vermont. "There is a large amount of feeding on humans."

People should be made more aware of triatomine bugs so they can take precautions against being bitten, Stevens said.

Chagas disease is caused by the parasite Trypanosoma cruzi. Most people who become infected experience no symptoms or have only mild bouts of fever, fatigue, body aches or vomiting, according to the CDC. But the disease can become chronic and cause serious complications years later, including heart failure, altered heart rhythm, cardiac arrest, and enlarged esophagus or difficulties with eating, the CDC says.

To find out what triatomine bugs in the United States feed on, Stevens and colleagues collected DNA from the blood meals of 13 of them. They learned that five had fed on humans, and five carried Trypanosoma cruzi. Fortunately, Stevens said, none of the bugs carrying the parasites had fed on people.

The study was limited by the expense of sequencing DNA, which limited the number of bugs that could be tested. Stevens said. The researchers plan to conduct further tests on a larger number of bugs using a less expensive, less labor-intensive test.

Some 8 million to 11 million people in Mexico, Central America, and South America are thought to have Chagas disease, and about 12,500 people die from it annually. The species of triatomine bugs in those countries are thought to transmit the disease more effectively than those in the United States do. However, as the U.S. becomes warmer due to climate change, species native to Latin American may be extending their range up north, increasing cases of disease here, Stevens said.

Less common routes of transmission include receipt of a blood transfusion from an infected person and spread of the parasite from mother to child during pregnancy.

Research from South America indicates oral spread of the parasite from consumption of food or drinks contaminated with the bugs' fecal matter is emerging as the primary way people in the Amazon become infected, according to a recent study in the journal Clinical Infectious Diseases.

Triatomine bugs are attracted to light, so it's a good idea to put screens on your windows to prevent them from coming in the house at night, Stevens said. In the United States, the bugs are found most commonly in the South, she said.

The study was published March 14 in the journal Emerging Infectious Diseases.

Pass it on: Chagas disease transmission may be more common in the United States than thought.