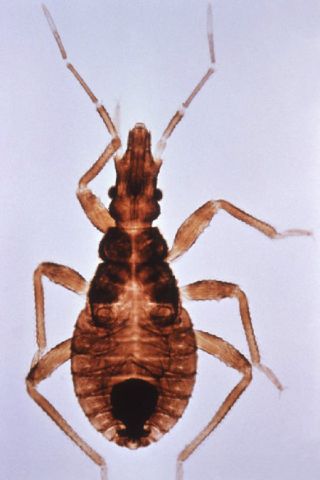 Kissing bugs, like this one, spread a parasitic infection known as Chagas disease.
(Image: © CDC/ Donated By the World Health Organization, Geneva, Switzerland)

Americans may be more at risk for a parasitic infection known as Chagas disease than thought, indicates a study that found a surprisingly high number of so-called kissing bugs had fed on human blood.

Triatomine bugs earned their nickname by biting people on the face to suck blood at night, and the bugs can carry a parasite called Trypanosoma cruzi, which causes the potentially life-threatening Chagas.

By examining 13 bugs collected in Arizona and California, a team of researchers found that five of the insects were infected with the parasite, and — more surprisingly — five of the 13 had fed on human blood. (None of the bugs that had fed on humans also carried the parasite.) This finding, detailed in the April 2012 issue of the journal Emerging Infectious Diseases, suggests that the 11 species of kissing bugs in the southern United States may feed on human blood more often than thought.

"The bugs are here, they are feeding on people. We should be aware of that, because once you are aware of them it is fairly easy to protect yourself from them," said Lori Stevens, the lead study researcher and a professor at the University of Vermont.

Their results also suggest there are unreported cases of Chagas transmitted by the insects in the United States, Stevens said, noting that doctors are becoming more aware of the problem. Chagas can also be spread by contaminated blood, organ donation, by infected mothers to their unborn babies, and through contaminated food, according to the U.S. Centers for Disease Control and Prevention (CDC).

The insects that spread Chagas live only in the Americas, mainly in poor, rural parts of Latin America. In Mexico, Central and South America, an estimated 8 million to 11 million people are infected.

Meanwhile, the bugs live throughout the southern two-thirds of the United States, but documented cases of insect-transmitted disease are rare, according to the CDC. Though the researchers still suspect transmission of Chagas to humans is low, Chagas disease is easily missed. Initial symptoms can be vague, if they occur at all, and can include fever, fatigue, body aches, headache, rash, loss of appetite, diarrhea and vomiting. The most recognized marker is called Romaña's sign, which includes swelling of the eyelid on one side of the face.

Without treatment, these symptoms usually fade, but life-threatening cardiac and intestinal complications can develop. The bug's saliva can also cause severe allergic reactions.

To determine what the kissing bugs had bitten, the researchers used a technique that is used at crime scenes to determine whether blood belongs to a human or animal, according to Stevens.  Using blood from the bugs' abdomens, they looked for DNA (the genetic code called deoxyribonucleic acid) specific to vertebrates.

Once they had found vertebrate DNA, they looked more closely to determine to what sort of animal it had belonged. They found that the kissing bugs had fed not only on humans, but on dogs, wood rats, chickens and pigs. Finding that five of the 13 bugs from two species they sampled had the parasite wasn't such a surprise; earlier research had shown an infection rate of 67 percent among one species of the bugs.

But finding that a different five bugs had fed on humans suggests there is greater potential for transmission to humans than previously thought, the researchers write in their study.

Unlike, say, a mosquito carrying malaria, Chagas disease isn't transmitted directly by the insect's bite; rather the parasite travels in the insect's feces. There are numerous species of kissing bugs, and those in Latin America are thought to spread the disease much more readily because they defecate while sucking blood out of a host. Species farther north tend not to defecate when they eat. This difference may explain why the disease is so much more prevalent farther south.

Housing in rural Latin America, made with mud, adobe, straw and thatch, also probably provides better habitat for the bugs than the tighter construction of homes in the United States.

To keep the bugs out, make sure you have screens on your windows, and, if you are camping seal your tent. Also, remove piles of rocks or debris that could house the insects, Stevens said.