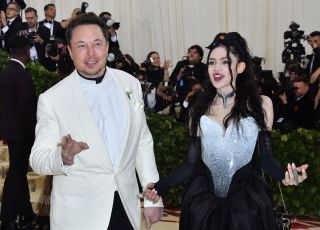 Elon Musk and musician Grimes show up as a couple to the 2018 Met Gala on May 7 at the Metropolitan Museum of Art in New York.
(Image: © ANGELA WEISS/AFP/Getty Images)

It's Elon Musk at his Elon Musk-iest: According to news reports, the space-and-electric-car entrepreneur met his current girlfriend by making a joke about treacherous artificial intelligence.

Musk and the musician Grimes, whose real name is Claire Boucher, went to the Met Gala as a couple Monday (May 7). According to the gossip publication Page Six, the two met via Twitter, when Musk thought to make a pun about "Rococo's Basilisk," a mashup of the thought experiment "Roko's Basilisk" and the elaborately ornamental style seen in 18th-century France.

Musk soon learned that Grimes had made the same pun in a music video in 2015, and the rest is romantic history. Roko's Basilisk, on the other hand, is a terrifying vision of the future and the center of a yearslong online subculture maelstrom.

The whole thing got started in 2010, when a person going by Roko posted a thought experiment to the site LessWrong, a forum where people discuss everything from philosophy to artificial intelligence (AI) to cognitive science. The post was deleted, but RationalWiki preserved a copy. Roko's idea was that if, in the future, a super-intelligent AI designed to maximize the common good were to come into being, it might punish everyone who didn't contribute to its existence. [Super-Intelligent Machines: 7 Robotic Futures]

"Of course, this would be unjust, but it is the kind of unjust thing that is oh-so-very utilitarian," Roko reasoned.

This hypothetical would take place after the singularity, the point at which artificial intelligence becomes indistinguishable from life itself — in fact, better than life itself, because it can do things like upload itself indefinitely, achieving a kind of silicon immortality. If this godlike power discovers you didn't help create it, well, sheesh. It might just decide that your just reward is eternal torment. [A Brief History of Artificial Intelligence]

The "basilisk" name came from a medieval legend about a snake that could kill with a glance.

Here's the trap, though: If you didn't know about the possibility of Roko's Basilisk, you're in the clear — the AI is only likely to come after those who predicted its existence but chose not to, say, donate all their disposable income to help bring it about. Just by reading about the possibility of Roko's Basilisk, you've doomed yourself. (Sorry.)

That caveat, in a nutshell, is where the online maelstrom started. The founder of LessWrong, Eliezer Yudkowsky, excoriated the post as "STUPID" and "genuinely dangerous." Just by thinking in great detail about how an AI might blackmail you, Roko had set him or herself up to be blackmailed, as well as setting everyone else up who might read the post.

"I'm banning this post so it doesn't (a) give people horrible nightmares and (b) give distant superintelligences a motive to follow through on blackmail against people dumb enough to think about them in sufficient detail," Yudkowsky wrote.

From Roko to romance

The ban on Roko's Basilisk discussion on LessWrong lasted until 2015. Yudkowsky later wrote on Reddit that he regretted his reaction, which made it seem like he thought Roko was right; he actually believes that no artificial intelligence designed with humanity's best interests in mind would end up torturing people. Instead, he wrote, he deleted the post because the idea had no potential benefit to anyone.

Musk might be particularly fond of Roko's Basilisk's jokes because the original post mentioned him. Roko writes that someone like Musk, who is "single-handedly changing the faces of high-impact industries," would be in the good graces of the theoretical superhuman AI. Musk has also been vocal about the potential dangers of AI, calling for regulation and warning just last month that AI could become an "immortal dictator."

"If AI has a goal and humanity just happens to be in the way, it will destroy humanity as a matter of course without even thinking about it. No hard feelings," Musk said in a documentary called "Do You Trust This Computer?," which was released in April. "It's just like, if we're building a road, and an anthill happens to be in the way. We don't hate ants, we're just building a road. So, goodbye, anthill."

Grimes, for her part, is a Canadian musician and visual artist who came up with the "Rococo Basilisk" pun for her music video "Flesh Without Blood." The video features a character who wears Rococo-style wigs and voluminous dresses and ends up stabbed in the gut and covered in blood on a tennis court.

"She's doomed to be eternally tortured by an artificial intelligence, but she's also kind of like Marie Antoinette," Grimes told FuseTV.