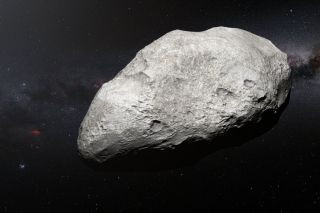 This asteroid 2004 EW95 (shown in this artist's impression) have have been kicked out into the Kuiper Belt by "drunken" gas giants in the early days of our solar system.
(Image: © ESO/M. Kornmesser)

New observations of a faraway asteroid may have given scientists the first piece of long-sought evidence that our solar system's gas giants once careened drunkenly through space, kicking smaller planetoids aside as they lurched half-formed through the cosmos.

The asteroid — named 2004 EW95 —was first discovered in 2004 orbiting about 2.5 billion miles (4 billion kilometers) away from Earth in the donut-shaped ring of ice and rock at the edge of our solar system called the Kuiper Belt. The Kuiper Belt begins beyond the orbit of Neptune, about 30 astronomical units from the sun, or about 30 times the distance between the sun and Earth, and may extend nearly as far into interstellar space. (One astronomical unit is about 93 million miles, or 150 million kilometers.) [Meteorites: Rocks That Survived Fiery Plunge to Earth]

While the belt is likely home to trillions of comets and hundreds of thousands of unexplored, icy planetoids (including the dwarf planet Pluto), scientists suspect that many thousands of the mysterious objects there originated much closer to Earth.

But how did those objects end up on the edge of the solar system? Some recent theories suggest they were thrown there by renegade gas giants like Jupiter and Saturn during the early days of our solar system's formation. According to these theories, the gas giants didn't start their life in a fixed orbit, but rather roared through the galaxy accreting material, bouncing against each other's gravity and launching the smaller, weaker bodies in their path far and wide into space.

In a recent paper published in the March issue of the Astrophysical Journal Letters, an international team of researchers took a detailed look at the faint light reflecting off of the Kuiper asteroid 2004 EW95. With some help from the European Southern Observatory's Very Large Telescope (yes, that is its real name), the team collected detailed information on the light that reflected back from the asteroid during two separate sessions in 2014 and 2017. (Since different elements absorb and reflect different wavelengths of light, the light reflected back from an asteroid can reveal its composition.)

"The reflectance spectrum of 2004 EW95 was clearly distinct from the other observed outer solar system objects," lead author Tom Seccull, a postgraduate research student at Queen's University in Belfast, Northern Ireland, said in a statement.

Unlike other known Kuiper Belt objects, which are uniformly dark and largely featureless, 2004 EW95 reflected faint wavelengths that seemed to correspond to the presence of certain minerals. These minerals, called phyllosilicatesand ferric oxides, suggest that the object formed under similar conditions to many carbonaceous asteroids found much closer to Earth. However, the asteroid's light reflection data suggested 2004 EW95 also sustained a massive blow that caused it to heat up significantly.

"[These findings] are consistent with the idea that this object may have formed near Jupiter among the primordial [carbonaceous] asteroids and was subsequently emplaced into the Kuiper Belt by the migrating planets," the authors concluded in their paper.

If this ancient, faintly-glinting asteroid is indeed a carbon-rich exile thrown far from its original home by a surly gas giant, it provides a "key verification" to one of the dominant theories about the early days of our solar system, the researchers wrote — in which the gas giants partied it up by charging through the solar system and ejecting rocky bodies out into far-flung orbits.

Closer observation of the Kuiper Belt could yield thousands of other clues to the foundational mysteries of our solar system — and all we need is a Very Large Telescope to uncover them.