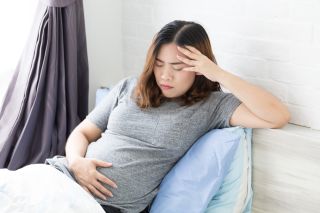 When a California woman was diagnosed with a brain tumor in her ninth month of pregnancy, her doctors decided to delay any treatment until after the baby was born. But when she returned to the hospital for a brain scan three months after giving birth, her doctors found an unusual sight: The tumor had nearly disappeared, according to a recent report of the woman's case.

The scans weren't showing some mistake. Instead, the mass on the woman's brain had seemingly done a vanishing act — now you see it, now you don't — so her doctors dubbed it a "Houdini tumor," after the well-known magician and escape artist Harry Houdini, according to the case report, published online April 8 in the journal World Neurosurgery.

Neurologists first saw the 23-year-old woman in her 37th week of pregnancy. At the time, she told doctors that she'd had severe headaches on the left side of her forehead for one month, accompanied by nausea, vomiting and occasional episodes of blurry vision. Although this was her third pregnancy, she had never experienced these symptoms before. [27 Oddest Medical Cases]

An MRI revealed the woman had a meningioma — a common type of tumor that forms in the membranes surrounding the brain and spinal cord known as the meninges — on the left side of her head behind the ear. Meningiomas aren't technically brain tumors, because they don't form in brain tissue but instead form in the tissue lining the brain, according to the Mayo Clinic. However, the tumors are sometimes categorized as brain tumors because they can compress and squeeze brain tissue, nerves and blood vessels, the Mayo Clinic says.

It's unclear when the woman's tumor first appeared, but in some cases, meningiomas may be stimulated by the release of hormones during pregnancy, said case report lead author Dr. Vikram Chakravarthy, who is a neurosurgery resident at the Cleveland Clinic but who treated the woman while he was at Loma Linda University School of Medicine in California.

It's possible that there was a small growth on the woman's brain before she became pregnant that increased in size during pregnancy, Chakravarthy told Live Science. The doctors suspect that pregnancy-related hormones may have played a role in the growth of her tumor during pregnancy and in its sudden disappearance not long after she gave birth.

The curious case of the vanishing tumor

One month after giving birth, the woman said the headaches on the left side of her head hadn't gone away but she no longer had any blurred vision when the pain arose, according to the case report.

But because the woman still had significant swelling in her brain, doctors decided that surgery was needed to remove the tumor, and they scheduled it for one month later.

During the woman's final medical appointment before the operation, she had another MRI. This scan, taken three months after she had the baby, showed the tumor had shrunk significantly and the swelling in her brain had disappeared, according to the case report.

There have been other case reports of meningiomas that have enlarged or become symptomatic during pregnancy, as well as other published reports of symptoms decreasing and tumors reducing in size after delivery, but it is a "relatively uncommon occurrence," according to the case report.

It's not entirely clear what role pregnancy may have played in the tumor's appearance during pregnancy and sudden disappearance after delivery.

There is a subgroup of meningiomas that appear to have receptors for estrogen and progesterone, which may cause them to swell during pregnancy when levels of these hormones increase, Chakravarthy said. But when hormone levels drop during the postpartum period, the tumors may shrink, he said.

The shrinkage of the tumor on repeat brain scans also seems to suggest that this was a benign, or noncancerous, tumor, Chakravarthy said.

Because the woman's tumor had shrunk significantly on its own, she no longer needed surgery. Doctors will continue to monitor her case by periodically repeating the brain scans to ensure that the tumor continues to shrink and behaves in a benign manner, Chakravarthy said.