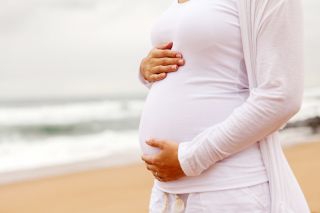 A pregnant woman visiting Egypt certainly has a unique story to tell about her labor: The woman appears to have given birth in the Red Sea, according to news reports.

The woman was reportedly a tourist in Dahab, Egypt, according to the Daily Mail. A series of photos captured the birth, showing the mother emerging from the sea and two men carrying the baby to shore, with the baby's umbilical cord still attached.

One of the men is reportedly the father, who can be seen holding a bucket containing the placenta. The other man in the photos is reportedly a doctor specializing in water births. The images were shared on Facebook by Hadia Hosny El Said, but have since been taken down.

It's unclear if this Red Sea birth was planned. The condition of the mother and baby is also unknown, although they appear healthy in the photos. [7 Baby Myths Debunked]

Still, experts say that despite appearances, this could be a very risky situation for a newborn, and people shouldn't come away with the idea that an ocean birth is safe.

"I worry that this is a completely dangerous environment for the baby," said Dr. Saima Aftab, medical director of the Fetal Care Center at Nicklaus Children's Hospital in Miami, who was not involved in this case. "Even in the presence of a medical professional," an ocean birth could be harmful,  Aftab said.

As water births have grown in popularity, experts have debated their safety.

For a water birth, a woman is immersed in water during labor and/or delivery, according to the American College of Obstetricians and Gynecologists (ACOG). Current evidence suggests that undergoing the early stages of labor in water may offer some benefits, such as shorter labor, ACOG says. So, the option of laboring in water may be offered to healthy women who are at least 37 weeks pregnant.

However, there isn't enough data on the risks and benefits of actually delivering the baby in the water for ACOG to recommend this method.

"Experts don't feel we're at a point yet where we can say it's safe," Aftab said. If a woman requests to give birth in water, she should be informed that the risks of this practice haven't been studied sufficiently, ACOG says.

One concern is that the baby may breathe in water and drown, ACOG says. There's also a risk for infection if the birthing tub has not been properly cleaned or if the water used for the birth is contaminated. (Last year, it was reported that two babies in Arizona got Legionnaires' disease after they were delivered via water birth.)

What about an ocean birth?

A birth in the ocean could have several additional complications, Aftab told Live Science. Given that the ocean is a vast and unpredictable environment, there is a risk that the mother could drown in her vulnerable state.

In addition, the high concentration of salt in ocean water could pose risks for a baby. Even if a baby takes in only a few gulps of seawater, it could damage the child given its small size, Aftab said. And because the temperature of ocean water cannot be controlled, a baby could become hypothermic, leading to poor outcomes, Aftab said.

And like other water births, an ocean birth could result in infection. "Babies are just so vulnerable" to infections and other hazards, Aftab said.

While an ocean birth may be off the table, Aftab said that medical professionals can work with mothers to "come up with a birth plan that keeps needs and wishes for labor front and center," while also keeping the health and safety of the baby in mind, Aftab said. "There may be room for a happy medium," she said.

The best chances of having a safe water birth would be under medical supervision in a health care facility, Aftab said. There, caregivers can closely monitor mother and baby, and the temperature and sterility of the water can be controlled, Aftab said.

Editor's note: This story was updated on March 14 at 5:45 pm ET. The Facebook photos referenced in the article were not taken by El Said, and have since been removed from Facebook.