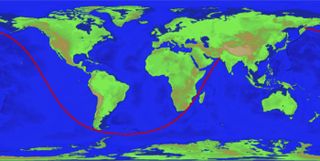 The longest continuous straight line over Earth's oceans would carry you more than halfway around the world.
(Image: © R. Chabukswar and K. Mukherjee)

How far do you think you'd be able to travel across Earth's oceans before running into land, if you wanted to sail in a straight line for as long as possible?

Reddit user Patrick Anderson (kepleronlyknows) asked that question on Dec. 9, 2012, posting an image suggesting that it would be possible to sail continuously for nearly 20,000 miles (32,000 kilometers) from Pakistan to Russia — more than halfway around the world.

Recently, two researchers set out to determine whether Anderson was correct, and they reported their findings in a new study published online April 23 in the preprint journal arXiv. [The World's Biggest Oceans and Seas]

Study co-authors Rohan Chabukswar and Kushal Mukherjee, researchers and colleagues at United Technologies Research Center in Cork, Ireland, often worked together to solve interesting puzzles, especially when there was "a particularly fun one," Chabukswar told Live Science in an email.

"When we found the assertion kepleronlyknows made on Reddit without any proof, we took it as a challenge to either prove it or disprove it with evidence," he explained. The two had often worked with optimization algorithms — a computation tool for simplifying mathematical functions — and this presented an opportunity for them to experiment with those tools creatively, Chabukswar said.

But first, the researchers needed a data source for Earth's land and water cover. They found one in a global model created by the National Oceanic and Atmospheric Administration (NOAA). This digital model of the planet's surface was constructed from multiple data sets representing global and regional measurements, and incorporated measurements of structures on land and of the ocean depth, according to the study.

Using an algorithm to search for the longest straight lines over Earth's oceans, the scientists eventually pinpointed a route that was strikingly similar to the one first presented on Reddit.

"This path is visually the same one as found by kepleronlyknows, thus proving his assertion," the researchers wrote in the study. Then, they used the same algorithm to generate the longest unbroken straight line over land, mapping a course from China to Portugal that traversed 6,985 miles (11,241 km).

Anderson said on Reddit that he generated his ocean journey from data on a Wikipedia page listing extreme points on Earth. While there were several possible options for the longest uninterrupted journey at sea (in a straight line traveling in any direction), the top candidate, according to the Wikipedia data, would have a starting point in Pakistan, along the southern coastline near the Port of Karachi, and would travel west, skirting the southern tips of South Africa and South America, until it terminated on Russia's Kamchatka Peninsula.

Because Earth is a sphere (albeit an imperfect one), the path, which measured 19,910 miles (32,042 km), appeared curved when viewed on a flattened map of the planet. Plotting a straight course over a globe while looking at a flat map for reference was "rather mind blowing," Anderson wrote on Reddit. But once he mapped the path on a globe, it showed up as a straight line, as Anderson demonstrated in an animation that he created using Google Earth and shared to YouTube on Dec. 29, 2012.

To test Anderson's result, Chabukswar and Mukherjee used an algorithm that incorporated great circles — circles drawn around a sphere, on a plane that passes through the sphere's center — and then compared groupings of great circles that contained the longest stretches over oceans without hitting land.

The path that the algorithm returned closely mirrored Anderson's. Again, when rendered to a flattened map, the track appears to follow a curve. But when seen on a globe, the path is a straight line, according to figures presented in the study.

It started in Pakistan, "threaded the needle" between mainland Africa and Madagascar, continued between Antarctica and Tierra del Fuego in South America, and terminated in Kamchatka Krai in Russia, covering 19,940 miles (32,090 km), the scientists wrote.

The study authors also used this method to answer a similar question: What's the longest uninterrupted distance you could drive on land, in a straight line (if there were no naturally occurring or human-made obstacles in your way, and if you had a vehicle capable of navigating any sort of terrain)? With that criteria in mind, they calculated a path over land that originated in China and crossed 15 countries, wrapping up in Sagres, Portugal.

However interesting these results may be, Chabukswar and Mukherjee noted that they embarked on their investigation "as a purely mathematical exercise" and that their findings were not an endorsement of sailing or driving along either of these routes.