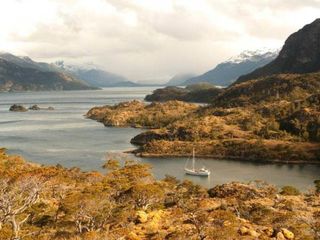 Land of fire and ice and animals: An expedition to South America's Tierra del Fuego set out to study the seals and birds that live along a frigid waterway in the region. The isolated wilderness is home to a huge variety of wildlife.
(Image: © Catherine Dougnac/University of Chile.)

A team of scientists has just returned from an expedition to a remote, icy fjord on an archipelago at the southernmost tip of South America the Tierra del Fuego, which means "Land of Fire" in Spanish.

In spite of its name, the region is home to a wide array of creatures built for life in the cold: seals, penguins , albatrosses, whales and other spectacular wildlife, all targets of the trip. [See pictures from their wild adventure here .]

The expedition team which included U.S. and Chilean researchers conducted surveys on southern elephant seals, black-browed albatross and other species in Admiralty Sound, a frigid waterway bounded by jagged ice-capped peaks on the Chilean side of the Isla Grande de Tierra del Fuego .

The island, shared by Chile and Argentina, is Tierra del Fuego's largest, with more than 18,000 square miles (46,600 square kilometers).

The team spent nine days in Admiralty Sound (also known as Almirantazgo Fjord) in its second expedition to the region in the past year.

The researchers said they successfully affixed satellite tags to young southern elephant seals, the first such effort involving this seal population, in hopes that the researchers will be able to remotely follow the seals' travels offshore.

In addition, the scientists got an extraordinary glimpse of the region's other species a small colony of leopard seals (the only one known to exist outside Antarctica), sei whales, more than 100 rockhopper penguins and a small group of king penguins. Many of these species travel between Tierra del Fuego and Antarctica.

"This wind-swept extension of the sea contains remarkable wildlife and represents a great opportunity for Patagonian conservation, said Bárbara Saavedra of the U.S.-based Wildlife Conservation Society, one of the groups that sent scientists on the South American journey.

"The expedition will generate the data needed to understand the ecological needs of the many species that use Admiralty Sound, including humans," said Saavedra, who works with the society's Latin America and Caribbean Program.