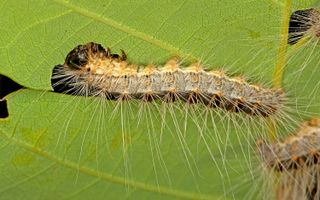 The London borough of Bexley issued a warning earlier this month for residents to look out for oak processionary moths (Thaumetopoea processionea) after their young were spotted emerging from eggs high up on trees throughout the borough.

The moths themselves aren't the problem. Instead, it's what comes before them: caterpillars. [Alien Invaders: Destructive Invasive Species].

The bodies of oak processionary moth caterpillars are covered in more than 62,000 tiny, white hairs that contain a protein called thaumetopoein. If people come into contact with this protein, it can cause rashes, itchy skin or, more rarely, a sore throat, eye itching and breathing difficulties. In some cases, it could even lead to anaphylaxis, which is a life-threatening allergic reaction, according to The New York Times.

What's more, the caterpillar's hairs can stay toxic for up to five years, according to the Times. That means that coming into contact with stray hairs, such as ones found in their nests, should be avoided at all costs, the U.K. Forestry Commission warned. Even coming into contact with a single windblown hair from one of these caterpillars can lead to health problems.

London residents still have time to prepare for the arrival of the caterpillars, however. The creepy-crawlers break free of their eggs, which are high in the trees, as spring progresses. As the caterpillars grow, they start descending the trees to build nests and chomp on leaves — and grow their toxic hairs, according to the Forestry Commission. But the commission doesn't expect the bugs to begin their descent down the trees, and thus into the path of humans, until mid-May. At that point, the caterpillars will be easiest to spot when they're marching in a distinguished "nose-to-tail" formation, as their name (oak processionary moth) suggests.

(The caterpillars threaten oak trees too, though not because of their toxic hairs. For the oak trees, the caterpillars' appetite is more concerning. They devour the tree's leaves, sometimes leaving them bare and defenseless against pests, diseases and environmental stresses such as droughts and floods, according to the Forestry Commission.)

Efforts are underway to kill the caterpillars with insecticides as soon as they emerge from their silky nests, according to the Commission.

The advance of the caterpillars

Oak processionary moths aren't native to Britain; they're an invasive species. They first appeared 13 years ago, most likely as eggs hidden in oak trees transported from continental Europe, according to the Forestry Commission. Given that this southern European species has been climbing it's way north through Germany and the Netherlands for the past 20 years, how likely is it that the moths can journey even farther, and end up in our backyards in the U.S.?

"Relatively unlikely," said Mark Wright, a professor of entomology at the University of Hawaii at Manoa who researches invasive species. "It's less likely than, for example, a fruit pest or other things that are readily moved around on things that we ship around the world."

A living oak tree, on the other hand, is not really something we move around the world, Wright told Live Science. But if the toxic critters were to somehow wiggle their way into a transcontinental shipment, they would be most inconspicuous as eggs, he said. Once they turn into caterpillars, however, they aggregate and move together, making it unlikely that groups such as the U.S. Department of Agriculture's Animal and Plant Health Inspection Service would miss them, he added.

There are other toxic caterpillars in the U.S., some of which are invasive, according to Wright. "We have huge issues with invasive species in the U.S., typically because of transshipment of goods by tourists," he said. Even though the probability of this particular species getting to the U.S. is small, it's "not to say one shouldn't look out for it."