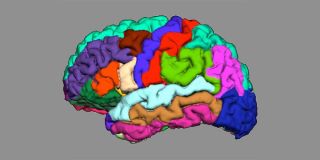 Schizophrenia may have a special fingerprint in the brain, even before its symptoms fully emerge. Now, a new method of analyzing this fingerprint — found within the folds of the brain — could help predict which young adults at high risk for schizophrenia will go on to develop the illness, a new study suggests.

The method, which was based on MRI scans of the brain, looked at the correlation between the amount of folding in different brain areas, which can reflect the strength of underlying connections between those areas. Using this method, the researchers could predict the outcome of 79 high-risk individuals with 80 percent accuracy, they reported yesterday (April 25) in the journal JAMA Psychiatry.

These findings need to be confirmed in larger future studies before the method can be used to in the clinic, the researchers said. And even then, a simple brain scan on its own won’t be enough to predict the future — it has to be used in conjunction with other symptoms for which a person is seeking help. But the goal is to find what clues from the brain's structure could help clinicians better identify and treat patients before they experience full-blown schizophrenia and drop out of schools or lose their jobs due to a psychotic episode, said study investigator Dr. Lena Palaniyappan, an associate professor of psychiatry at Western University in Ontario, Canada. [10 Things You Didn't Know About the Brain]

Schizophrenia is a mental disorder characterized by psychotic episodes involving delusional thoughts and distorted perception. It is often preceded by subtle symptoms: A teenager who is withdrawn and suspicious, has anxiety, depression or sleep problems, and who experiences subtle changes in thinking and perception may be deemed by a doctor to be at high risk for developing schizophrenia in the next two or three years. But having these symptoms, which overlap with those of many other mental health conditions, doesn't mean one will surely go on to develop schizophrenia — in fact, just about a third of individuals with these symptoms do.

"It's really hard to know who is going to develop schizophrenia and who is not," Palaniyappan told Live Science.

A wrinkle in the brain

Compared with other animals, the surface of the human brain is especially wrinkly — likely as a solution to fit a large brain inside a small skull. The patterns of folds in the brain's surface, called the cortex, are determined before birth and change very little after the first or second year of life.

Previous studies of people with conditions such as schizophrenia and autism have detected local differences in folding patterns. For example, they have found a smoother surface in one brain region or a more wrinkled one in another, when comparing people with these conditions to the general population.

Palaniyappan and his colleagues examined all the brain regions and the relationship between their folding patterns. The idea is that the degree of folding would be similar between two brain areas if they are strongly interconnected. So, if an individual doesn't show the same folding patterns as everyone else, it may suggest a problem in the wiring beneath the brain's surface.

"Imagine two brain regions have a strong wire between them. If you cut the wire off, both of these regions would not be properly folded," Palaniyappan said.

The team collected MRI brain scans from a group of people in Switzerland, who were on average 24 years old. The participants included 79 people with symptoms suggesting a high risk of schizophrenia and 44 healthy control subjects. [3D Images: Exploring the Human Brain]

Then, the researchers followed the participants for four years and found 16 people in the high-risk group developed schizophrenia.

Looking back at the brain scans, the researchers found that 80 percent of the time, the relationship between folding patterns could correctly identify who developed schizophrenia and who didn't. Those who did seemed to have a disorganized brain network — the folds of their cortical regions didn't go hand in hand as much as the folds in the controls and in the high-risk people who didn't develop the illness.

The earlier patients with schizophrenia receive psychotherapy or medication, the better they fare, according to a 2005 review of 30 studies published in the American Journal of Psychiatry. Early intervention may even change the course of the illness. One study published last year in Nature Neuropsychopharmacology, for instance, found a longer period of untreated symptoms was associated with weaker connectivity in the brain, especially in areas associated with responding to antipsychotic medications.