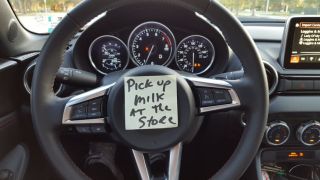 To avoid memory failure, sometimes you need to rely on something more than your brain.
(Image: © Courtesy of David Diamond)

Stoners may not be as forgetful and absent-minded as the stereotype suggests. A new study finds that heavy marijuana users are just as good as everybody else at remembering tasks they need to do in the future.

This ability, called prospective memory, is the brain's internal calendar, which keeps track of your to-do list — the appointment you have later in the day, the stop you want to make on your way home, medications you need to take every day and so on. But while forgetting to pick up milk is annoying, a lot more can go wrong when prospective memory fails: It's also what's thought to be responsible when a surgeon forgets to remove a surgical tool before closing up a patient or when a parent leaves a baby in a hot car.

Heavy use of some drugs such as alcohol and opioids may impair prospective memory, but there isn't sufficient research on whether marijuana has similar effects, said David Diamond, a professor of psychology and molecular pharmacology at the University of South Florida who wasn't involved in the new study. "This is an important area of research as marijuana is becoming legalized," he said. [7 Ways Marijuana May Affect the Brain]

To find out whether a marijuana habit can lead to a decline in prospective memory, researchers at University College London in the United Kingdom recruited 36 people who used marijuana almost daily and 18 people who didn't use the drug.

The participants played a game called Virtual Week that mimicked typical daily life scenarios. Throughout each virtual day, participants were assigned a number of tasks that they had to remember to perform at later points in the game.

The two groups scored similarly on the game, correctly recalling their tasks about 80 percent of the time, the study found. Additional tests also revealed no differences between groups in episodic memory, the type of memory that records past events.

Still, the findings may not apply to all marijuana users, the researchers said. The participants in this study were young, on average 24 years old, and were relatively high-functioning and well-educated, as half had at least one university degree.

"We cannot assume the same results would emerge in older frequent cannabis users, those with lower educational attainment or those seeking treatment for cannabis use disorder," the researchers wrote in the study, which was published March 27 in the journal Frontiers in Psychiatry.

And then there's the problem of measuring memory skills in the lab, where scenarios don't fully reflect real life situations, the researchers said.

"Prospective memory is highly vulnerable to distraction and stress. So, in the real world, it is very easily impaired," Diamond told Live Science.

Prospective memory can also conflict with the brain's "habit memory" system. For example, you may plan to take a child to day care but end up driving straight to work out of habit. Multitasking and stress make it even more likely for habit memory to take over, Diamond said.

How to save memory

It's still unclear how marijuana affects other kinds of memory, and research findings so far are somewhat mixed.

In one surprising study published last year in the journal Nature Medicine, researchers found that elderly mice treated with the active compound of marijuana, THC, actually improved on learning and memory tests. But it's unclear how those findings would apply to humans.

And long-term use of marijuana may have a different impact. In one large study, published in the journal JAMA Internal Medicine in 2016, researchers followed 3,400 young adults over 25 years and found that marijuana use did not affect any of the cognitive abilities tested, except for verbal memory. That is, people who frequently used marijuana for years remembered fewer items from a list of words than their peers did. The age that a person starts using marijuana is another important factor. For instance, one study, published in the journal Hippocampus in 2015, found that young adults who used marijuana as teens performed about 18 percent worse than nonusers on a test that required participants to recall details from a story they had heard 20 minutes before.  These and other research findings suggest that marijuana's long-term impact on the brain is strongest for those who start using the drug in their teens, when their brains are still developing, according to the National Institute on Drug Abuse.

Prospective memory is relatively new to research, and a lot more needs to be done before we fully understand how it works in a healthy brain and how it can be impaired or improved. Two different mechanisms appear to help us remember that something needs to be done when its time comes up, scientists have proposed. One is a mysterious passive mechanism that makes an intention spring to mind, without our explicit control. Another is careful monitoring and actively trying to remember the intensions.

And there's also a third strategy: Use a calendar, or something even simpler: sticky notes.

"I use cues to help me remember important things. I put them on my calendar and use a sticky note in my car," Diamond said. "We have to use cues and technology, because ultimately, the brain is too flawed and memory is too frail."