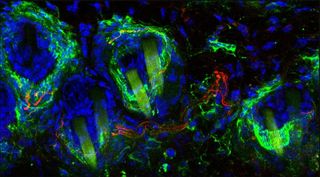 A light therapy provided pain relief to mice with neuropathic pain who had serve pain from even a gentle touch. Above, a microscopic image of the skin of a mouse, with the nerve cells that are responsible for sensitivity to gentle touch shown in green. The neurons are located around the hair follicles, shown in light green.
(Image: © Dhandapani et al., Nature Communications.)

Just flicking on a light might one day provide pain relief to some patients with chronic pain, early research in animals suggests.

The research focused on a type of chronic pain called neuropathic pain, which results from damage to or dysfunction of the nervous system, according to the Cleveland Clinic. People with this condition may experience severe pain from even the lightest touch — for example, if something gently brushes against their skin.

In the new study, researchers in Italy first identified the type of nerve cell that appears to cause this sensitivity to gentle touch in mice. Then, they developed a light-sensitive chemical that binds to this nerve cell.

When mice with neuropathic pain were injected with this chemical, and then had a near-infrared light shined on their bodies, the treatment appeared to lead to pain relief. Normally, mice with neuropathic pain would quickly withdraw their paws when they were gently touched, but after the therapy, the mice showed normal reflexes upon gentle touch, the researchers said. [5 Surprising Facts About Pain]

The light therapy works by clipping off the nerve endings of the targeted cells, thus desensitizing them. "It's like eating a strong curry, which burns the nerve endings in your mouth and desensitizes them for some time," study leader Paul Heppenstall, a group leader at the European Molecular Biology Laboratory in Rome, said in a statement.

The therapy specifically targets the nerve cells that are sensitive to gentle touch. Other nerve cells — such as those that sense vibrations, cold or heat — are not affected by the light therapy, the researchers said.

The treatment is temporary; in the mice, the nerve endings grew back after about three weeks, and the animals became sensitive to gentle touch again.

Because the new study was done in mice, much more research is needed to see if the therapy will also provide pain relief to people with neuropathic pain. For instance, the researchers still need to confirm that the cells that cause sensitivity to gentle touch are the same in mice and people, and examine the safety of the treatment.

"A lot of work needs to be done before we can do a similar study in people with neuropathic pain," Heppenstall said. But the researchers want to develop the technology further," with the hope of one day using it in the clinic," he added.

The study was published today (April 24) in the journal Nature Communications.